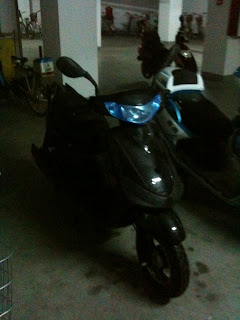 Its a crap photo I know, but this is it, my brand new 125cc twist n go scooter. With the lock, helmet and alarm, the whole bike cost me about £280. And that is BRAND new. It took AJ's advice to get a bike simply for easy of movement. The college is quite far away by bus and having the bike makes sense and gives one that extra freedom.  Of course I do not have a Chinese license, tax, insurance, mot all those things we are paranoid about back in the UK. It also doesn't make much sense when you see how the Chinese use the road system. Rules of the road do not seem to exist here. Although there is not a lot of traffic per se what there is seem to abide by the individual drivers having their own perception of what a road rule is.
As far as riding the bike is concerned, there do not seem to be any rules, apart from copious use of the horn to make people aware that you are there and coming through. Using the horn apparently also gives one carte blanc to ignore all the traffic signals. In China the RED light does not exist.
Is it safe? I hear you ask, clearly worried about my safety. I think so, there is not a lot of traffic, and as I have already mentioned the roads are really wide and there is also the very wide cycle paths which are usually empty. So even when going through a red one is relatively OK. One does have to keep alert and have your wits switched on, especially through the junctions, oh and watching out for those drivers who are convinced that driving the wrong way up the carriage way is the quickest way to where they are going. And unlike the 20 million other scooter/motorbike riders in China, I wear a helmet.
So that was the big news for yesterday. Earlier this week, since visiting the city I have been doing pretty mundane home based things.
On Monday I had to wait in for the 'gas man'. My cooker wasn't working and when I say cooker what I mean is the single gas ring designed for cooking on a wok. I also have a rice cooker that I can't, well don't know, how to use and a microwave. (Does the toaster count too?)
In the afternoon AJ took me to our college on the back of his scooter - my first experience of China roads on a bike and pretty much my first experience of being a pillion passenger. Terrifying on any number of levels.  From our flat it took about 15 minutes to get there so you can maybe appreciate how far it is away.
The college is HUGE. I will be sharing an office, which is as big as a UK school classroom, with about another 20 teachers - well that was about the number of desks in the room. Obviously the colleges are still out so there were not many people about. I met one guy very briefly and met another Chinese teacher, James.
Then AJ took me to the bike mechanics because his bike needed an oil change and while I was there we had a look at the bikes on offer. Then to a mobile phone shop as I am still trying to get my iPhone unlocked - something I really should have done in the UK. They couldn't do it either.

On Tuesday I had to wait in for the 'water guy'. I have one of those water cooler things and I needed a new bottle. He came at about midday and replaced my bottle, but after he had gone I noticed that he'd nicked my spare bottle (empty) which AJ tells me was worth 50y - about £5!
Then AJ picked me up and took me back to the bike shop to purchase my bike. We went to another phone shop with no luck. He also showed me where the petrol station is, although my fuel gauge isn't working so Ill have to go back to the mechanic to get it fixed.
At 5 I met AJ and his wife and kids at a local shopping centre (on my bike, see useful already!) to have a meal. It was a 'hot pot' restaurant. On the table is a bowl split into two, both sides have boiling liquid in, I'm assuming its some sort of broth, but as I'm a veggie it probably doesn't help to enquire too deeply. 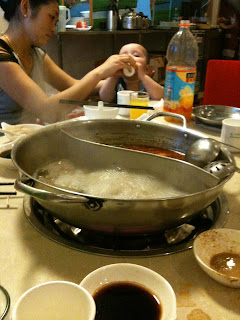 In the pic AJ's wife and son
What you do then is order loads of different stuff to put in the broth to cook it. We had lotus root, different types of tofu, seaweed, a couple of different types of mushrooms and other stuff and the meat eaters had meatballs. The left hand side was designated the meat side and the right side the veggie. This was a spicy/chilli broth.  We also had little bowls of sesame sauce and vinegar.  You put some sesame and vinegar in your bowl, then went fishing with your chopsticks, dipping your 'catch' into the sesame and vinegar enroute to your mouth. Lovely.
We were joined at the meal by the teacher I had met earlier - James 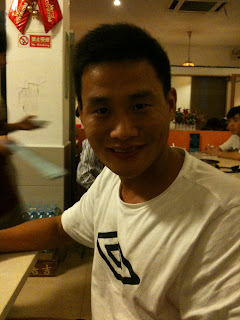 James
After we had eaten James took me to another shopping area - 15 minutes walk away to try and get my phone sorted (James is an English Teacher BTW) - but no luck.
I have actually downloaded the software to do this but I am being such a dick I want someone techie to hold my hand while I do it, whereas I bet in England, the US etc 10 year olds do it for fun!
Wimp.....Out
Posted by Rob Burton at 18:44