This is from the book China Road: One Man's Journey into the Heart of Modern China by Rob Gifford (Its here).


"Nanjing is a very pleasant city, despite being known as on of the three huolu, or furnaces, of central China, on account of its hundred-degree summers. Located mostly on the south bank of the Yangtze River, it has a population of more than 6 million people, and as with Shanghai, the overall atmosphere is one of energy, of people moving and looking forward...The streets are busy and the shops are full, of food and clothes, of toys and books, of electronic equipment and every brand of mobile phone...Nanjing's main streets are lined with graceful wutong (or Chinese parasol) trees...providing shade from the scorching summer sun.


The name Nanjing (formerly spelt Nanking) means nothing fancier than 'Southern Capital'. (Beijing means 'Northern Capital. Tokyo is called Dongjing, which means 'Eastern Capital'. There is no Western Capital) The city rests on layer upon layer of Chinese history. It was from Nanjing that the admiral Zheng He journeyed in 1405 to Southeast Asia, Arabia, Africa and beyond, so writers even claim America and Australia before the western sailors claimed the lands for themselves." (See 1421 : The Year China Discovered the World by Gavin Menzies).


I discovered Nanjing on Sunday. Aj was off to work (he seems to work non stop, making his fortune teaching English) and picked me up at 8 in the morning for the trip to the City.  We took the 130 bus from the stop outside our accommodation and this took us down the broad leafy road to the metro station. The impression you get from the locale is space. This is a big country and after the claustrophobia of the UK where everything is piled upon itself and many of the roads are mainly modernised ancient tracks and cart ways or roman roads, these roads are w i d e. They are basically dual carriageways masquerading as city streets. Plus on each side of the road, divided by a large verge is the cycle way which in itself is as wide as a country lane in Devon. The  fare to the station, and I think it might be the standard fare anywhere is 1 yuan (y) which is about 10p.


At the metro station I pay the 3y fare and we climb to the elevated track. The train is  modern, clean, air conditioned, fast everything the metro/tube in London isn't. The trip to Nanjing center takes about 35 minutes.


This is a map of the Metro System. My station is on the red line to the right  - xianhemen and we are traveling to where the blue and the red lines intersect Xiniekou.

In Nanjing station AJ takes me to the booth to buy my Chinese version of the Oyster card and then casts me adrift as he has to get on to work. I have to vague directions to a Walmart where I  might buy stuff. I was to find Pizza Hut, stand with my back to it, cross the road and then take a couple of turns and there it will be.  But my first target is coffee. I wander through the tunnels of the station, shops on each side, food shops selling 'on the go snacks', clothes shops, female lingerie until I reach the end and ascend to the surface.  Blooming heck its HOT. The sun is out. It is to coin a phrase 'SCORCHIO'. But  hey it means I can put on my new sunglasses, and saunter around looking like a cool westerner.


But first things first coffee and just around the corner is a Starbucks. Sometimes we sneer at western culture, but sometimes, just sometimes, they are a godsend. I recall being in East Berlin just after the wall had fallen. I was at an academic conference, and as a vegetarian all I had eaten was baked potato, sauerkraut and apple cakes, simply because all the places our hosts had taken us to eat were in the main carnivorous palaces dedicated to eating Pig in all its forms. Then as a bunch of us starving veggies were roaming the streets looking for beer and sustenance, there on the horizon was a pizza hut. Salvation in the form of a family size (each) Veggie special.


McDonald's is also a boon to the traveller, simply because one can always guarantee clean toilets, in some countries (not China in my experience yet) they also provide free wifi and you can get a decent coffee.


So it was Starbucks and despite being in one of the 'furnaces of China' I had a large (venti) latte, damn it was good, the only thing missing was the Guardian (or as it was Sunday the Sunday Times). Soon suitably caffiniated I ventured out into the street. The sun was hot and the humidity was high and my shirt was soon sticking to my back and my hair was wet.


I had two main goals, one was to find walmart and the other was to buy a street map. But first I wanted to find the pizza hut to orient myself. All around me and above by the metro station are huge sky scrapers, not packed together, like New York or somewhere, but scattered around the City. I walk the block and find the Pizza Hut, but then find Ive forgotten if I have to go left or right, so give up and then wander about a bit more.


My next target is to go to a district called Fuzi Miao about a 2 kilometer walk  which according to the Rough Guide 'harbours a noisy welter of street vendors, boutiques, arcades and restaurants. After a sweaty walk I find myself at the entrance: 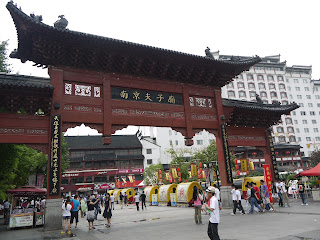 The place is a riot of shops and stalls. Loads of clothes shops, all with the ubiquitous SALE signs. And these shopkeepers are not shy of telling you they have a sale, mainly through loudspeakers.
To be honest, one wouldn't really know that you were in a communist country, conspicuous selling and buying was going on apace. There was the usual tourist tat, ersatz antiques, plastic junk, amongst the shoe and clothes shops, it could be any shopping street in the West. But things did stand out: 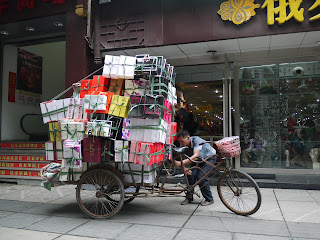 This guy delivering shoes for instance.
And this tree 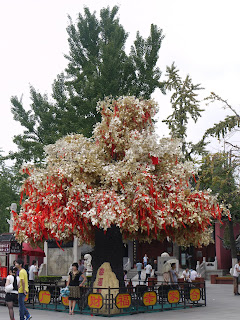 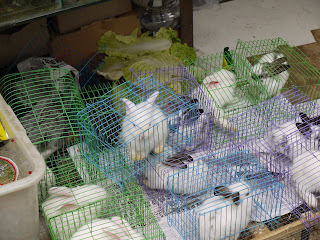 So by then I was needing a drink and something to eat. First I found a place selling chilled coconut milk which was really delicious (5Y/50p) and then I found a little back street restaurant and had a plate of noodles, they were cold, but man they were delicious and it was another 5y a plate!
Soon though the heat was getting to me and I baled, got the metro back to the main intersection and my own train and bus back. (I will admit I was suffering a bit from 'dhobi itch' and needed to get home to smear Daktarin all over the bits that were sore)
This was another entrance to the market 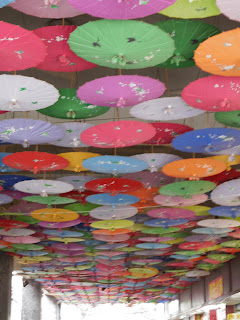