So here I am in China, in my flat in Nanjing. I arrived yesterday after being in Beijing for two days at the EMW seminar (EMW is the agency that places the teachers in the schools)

I have been on the net more or less since I left Okehampton. Twitter and TXTing has been the main lifeline whilst travelling, but once in China all my social networking was behind the 'Great Firewall of China'. Access to a lot of the social network sites is blocked, so for example I couldn't access Facebook and blogger.

Fortunatly it seems that using twitter on my phone still seemed to get through and my tweets post to my facebook, so my facebook and twitter 'friends' could keep up with what was going on. So one of the first things I had to do was buy access to a VPN. This is what a VPN is Basically I access the internet through an encrypted server somewhere in the USA so it is not blocked by the Chinese Firewall

Typical banks huh? Its Sunday evening, just before I leave early monday morning, and I get a telephone call from their fraud computer, telling me they have detected  possible fradulent activity on my account and I had to call this number to confirm......of course the number is spoken out quickly and only once, so you are left wondering if this is actually a scam or if it really the bank (Santander).

The previous day I had transfered some money from my account onto a credit card to clear it. Now the bank was blocking the payment. So I found the number on the internet, and rang it, the robot knew it was me calling and took me through some security and I confirmed the transaction. Phew I thought that was easy in the end. Of course just looking at my account just now shows the money has not left my account, and with this account I can only telephone them, not do it online. Its frustrating!

But I still got to Exeter early enough for a coffee with Lucia and Matilda before  it was time for the bus.  The last six  months had flown past and I cannot believe that here I was about to start the main part of my journey to China.

The goodbyes were swift, tears were spilt, but it was best that they got in their car and just went. And thats what they did.  I managed to get on the earlier bus which was good, otherwise I would have had to spend another hour or so at Exeter bus station which I wasnt looking forward to.

The trip to the airport was uneventful as they usually are and I was at the shopping mall they call Heathrow in good time for my flight. 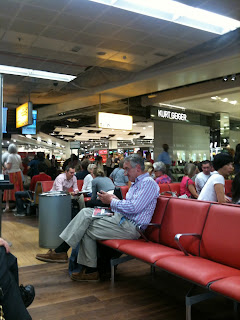 But I was a bit annoyed that I couldnt connect to the paid for Wi Fi, I tried 5 or 6 times and called up their help desk twice. Why cant it just be free? A public service? It was really annoying.

Then it was time for the flight, I'd picked the later one, about 8:30 in the evening so late my sleep pattern would be natural. Anyway all went well and we took off on time, this is the beast 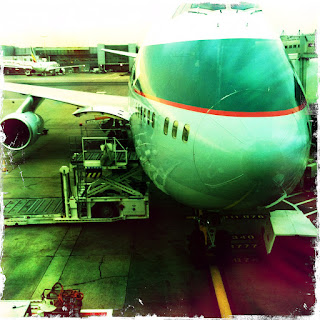 and soon it was time for food.

I had opted for the 'Oriental Vegetarian' off the menu that was offered on booking (via the internet) and very nice it was too! 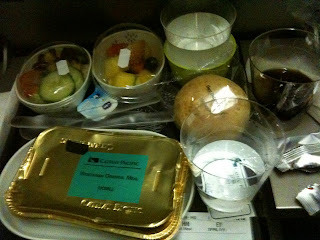 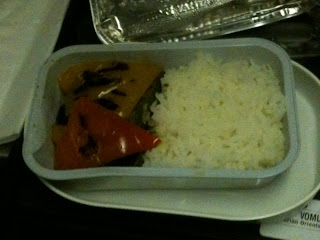 On Cathay Pacific there were loads of choices on the inflight entertainment system which was located in the back of the seat, but as I had left my 'close work' glassess in my bag in the locker, and I was hemmed in by the window, I used this as an excuse to listen to Stephen Fry's autobiography via an audiobook I had downloaded onto my iphone.  This seemed to be a god idea and I was soon lulled off to sleep.

I woke up earlyish and it was light outside and we seemed to be here... 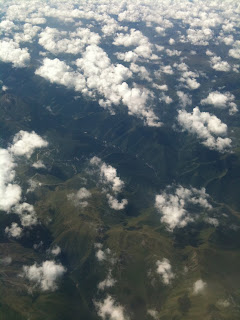 which according to the onboard flight simulator map thingy told me that we were somewhere over the himalaya region I think.

As usual on these flights all goes to plan, breakfast was served, which for me seemed to consist of some gloopy rice porridge with a mushroom in it, I managed the fruit bowls..., then we flew a bit more 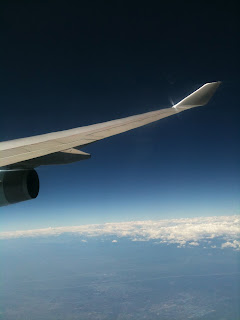 Until we seemed to have reached our destination - Hong Kong, the pilot told us that there was a stunning view of the City on the left side of the plane, sadly I was on the right, so this is what I got to see. 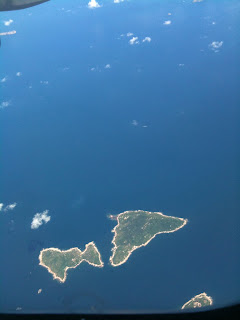 But we soon landed and I found myself in a much better class of shopping mall offering all sorts, so I opted for a cappuchino and blueberry muffin! Although I was quite tempted by the Sea Blubber and Chili and it was a toss up as to wether I had the Poached vegetables in oil... O well another day perhaps. 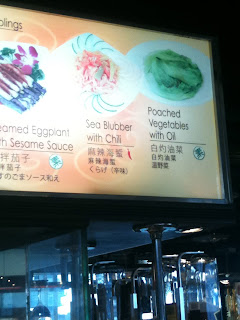 Then onto the next plane enroute to Beijing. It all went very well and we didnt crash or anything and soon I was in the most spectacular beijing airport, a very modern building and huge too.

I was met, as expected by a representative of the hotel in a very jet-set manner, him holding up a board with my name on it and soon I was being driven through the streets of Beijing to my hotel. When I got there they were confused! 'OMG its all going wrong' I thought, No, it was just that the hotel represenatative had taken me to the wrong hotel, it seemed I was in another hotel, which belonged to the first (more posher) hotel.

Ah well, soon I was back in the van and at the right hotel, checked in and into my room 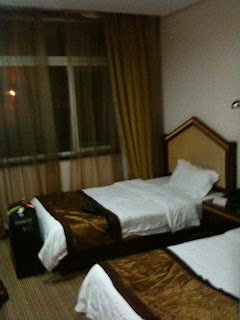 Well, I say soon, what I mean is, when I got to my allocated room, my room share colleague was out (it was about 9pm, they were all out on the piss), so there was only one electric key, which does the lights etc, they didnt have a key, so it was either sit in the dark or get another room.  I was given another room, which as soon as the door was closed I noticed had a really bad chemically smell, as I was sniffing and peering about, the door was knocked. It was Maggie and FeiFei, my EMW hosts/employers come to say 'Hi'.  I was soon in another room! Not smelly, with working lights etc. All I had to do now was stay awake until my own room share colleague turned up from Australia 'in about two hours' - about 11 pm!