The next morning breakfast was when we got to meet some of the other teachers at the seminar.  A Chinese breakfast seems to consist of the leftovers from the night before.  Its not of course, but it is a selection of vegetables, including cabbage, boiled rolls, eggs, tofu and stuff.  EMW had put a toaster on our table, with bread, jam, spread and Vegemite!

Coffee was a large jug filled with a sweet brown liquid that bore little resemblance to coffee. But in the end I succumbed because it was hot and wet, which is the best thing I can say about it.

So I got to met a few people over breakfast and it was clear that I was going to meet a varied bunch during the seminar after breakfast. 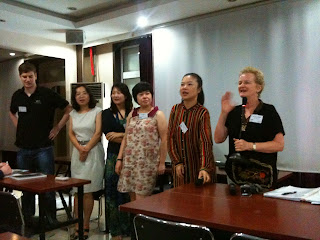 This is the staff of EMW who organise the whole thing. From the left is Xavier (Canadian) who is the guy from British Colombia Institute of Technology, who I'm working for he does all the tech stuff then Yanping who is the Chinese liaison for BCIT, then FeiFei and a colleague from the Beijing office, then the boss of the Chinese operation, I forget her name and Maggie (New Zealander), the director of EMW.
The group turns out to really diverse in terms of places of origin, ages and backgrounds. There were Americans, Australians, Filipino's, Brits (inc Scots), and an African from Cameroon. They were male and female, with varying age range, and I wasn't the oldest, Ivan my Aussie room mate was. Some had already been teaching in China and some had been here two years or more, AJ, my colleague here in Nanjing has been teaching here for two years.
The seminar basically took us through some of the basic teaching practices we could expect, an orientation into living in china, the do's and don't of how to handle the schools - apparently the worse thing we can do is be late to class and/or leave early, this apparently puts a huge blot on ones copybook and it is practically three strikes and you are out, or at least not re-employed by that school.
So that lasted two days, most of which I was afflicted by jet lag, which basically meant waking up at about 3am, having to listen to Stephen Fry and his lulling voice until I fell asleep again at about 5 am, and then feeling really tired and brain dead at around 11 am in the seminar.  I seemed to feel better after lunch.
The lunches and dinners in the hotel were really nice and were good sociable events. In the evenings though I just wanted a shower and bed. Most of the young ones were out to the bars, I would have been there with them once, but I was tired and I really didn't want the attendant hangover on top of the jet lag. 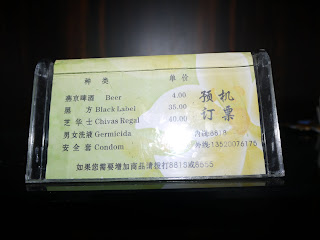 I don't know if the standard of in room services is any indication of the quality of the hotel one is staying in, but as you can see that in this hotel ALL of the customers needs are catered for. I mean a hand delivered condom to the room and all for the sum of 10 yuan (about £1) - now that's what I call service!

There was also this interesting switch 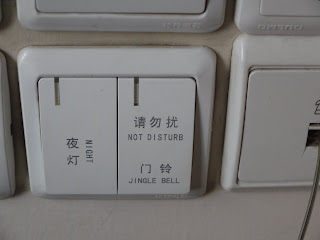 We did press it but Santa didn't turn up - darn communists!
The last night of the two day seminar saw us all coached over to the big hotel I was first taken to for a bigger and better meal, although for me and the other vegetarians it was a bit disappointing with even less selection than the 'lesser' hotel we were staying at. But the wine and beer flowed, all on the company, and we had been allocated a game, in a group we had to mime an occupation and the others had to guess. My group, with AJ and Ivan saw us (me and AJ) miming Judges, with napkins on our heads, sending the criminal (Ivan) off to Australia  to become an Opel miner - the Chinese office adjudicated, and we came second, winning tee shirts. (I think we all won tee shirts actually). It was a good night and every one had fun and there were lots of drunken debates, obviously the 'youngsters' hit the bars after. 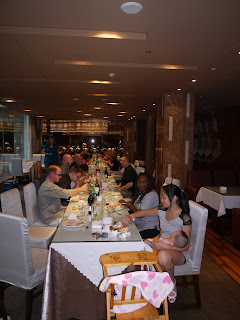 (Chinese woman with baby is AJ's wife and child). 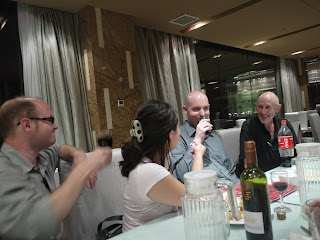 Ivan (far right) is the Aussie guy I room shared with, Chandler (far left) is American as is the other guy, the woman is American too we had great far ranging conversations. 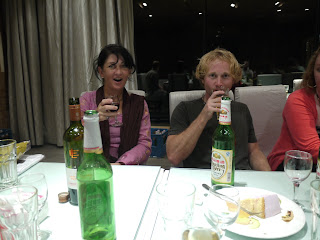 Australian and American, both their names escape me at the moment, but I did win his 'youth' in a betting game with the woman where we had to guess his age. (27 - I guessed 26). He is now hanging  in an attic of his choice withering away as I grow younger everyday! 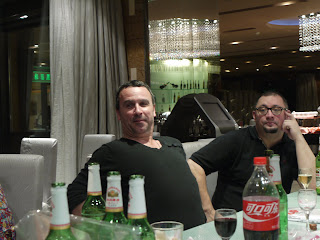 This is another Australian who has been teaching in China for a while and Scott (right) an American who is in China with his wife, she works for someone else, but they live in the same city, he travelled with me to the airport.
The next day saw us off to our respective destinations, I travelled on the bus, down the same road back to the airport, so having spent three nights in Beijing all I saw was the road to and from the airport!
The flight was delayed two hours because of heavy thunder storms, but I eventually got to Nanjing, where I was meet by 'Richard' from the Colleges international department. A 45 minute drive saw us at my new flat. I'm trying to locate it on google maps to show you, but I cant seem to pinpoint it yet, I haven't got the postcode but when I do I'll list the map.
Things I like about China thus far:
The jasmine tea
The food
The strange, interesting and funny English constructions
The airport


Things I don't like
My Kindle has developed a fault - there is a big blank inch thick line across the page. Amazon say I have to ring them!!!! Now I have nothing to read!!!
The 'coffee'
The humidity (but I might get to like it if it makes me thinner)