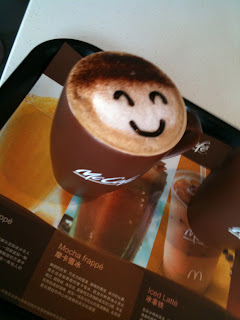 1. Its sunny for the first time since I got here
2. Today is the start of my employment, so Im being paid - hurrah
3. The coffee in McDonalds is great but I need a china mobile number to access their 'free' wifi

Yesterday I was out and about on my bike generally sussing out my general area. AJ was completely right, the bike is liberating.  However, I was a bit methodical, I didn't just roar off into the wild blue (or grey as it was) yonder.  No, I was pretty methodical, driving in sort of large squares, getting to the metro line, finding the big supermarket, where I'd met AJ the night before.  Then, as my sense of direction is pretty good, the 'pigeon area' of my brain still able to have a good idea of which way Im going, Im also pretty good at always knowing where North is. (its that way *points that way* see...)

I bought another lock chain for my bike, then treated myself to a coffee at McDonalds. I wanted to do this, although there are other coffee and pastry shops, in the western style around, because I wanted to see if they had wifi enabled. They do but as I mentioned above I need a China mobile number, my UK number didn't work, I tried.

Then, after coffee and a look around the shops, I went over to another strip mall where there is a shop that sells occidental food. AJ had pointed it out to me. There was nothing really I wanted to buy in there, it was mainly American branded stuff, a small pot of Marmite was about £8. (Im gonna check that price again as it does, on reflection, seem high. There was also a nice bakers that sold nice looking bread. The sliced stuff in the supermarket is a bit like cake, but its nice toasted with tea.

Then feeling bold, I decided to see if I could find my College. 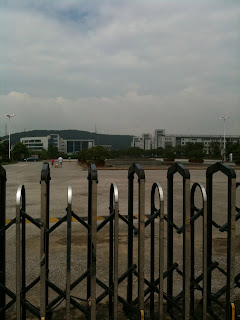 And as you can see I did. I did make a couple of wrong turns, but I knew I was in the general area, as, if you remember, AJ had taken me there on the back of his bike a few days ago. (see pigeon brain was switched on). 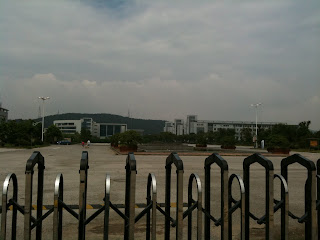 I know this pic is pretty small, (if you click the pic doesn't it pop out?) but 'my block' is the third one on the right.

In the area there are loads of schools and universities, in fact my address is University City. The places are huge. Think HUGE and then triple that thought to HUGE 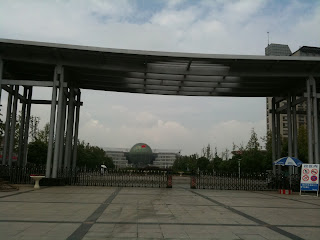 This is another University along the way 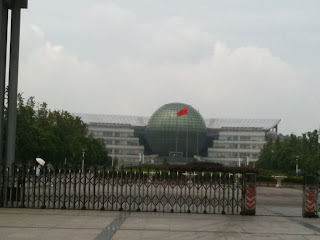 Yesterday was also the day the new students were turning up, so there was lots of activity at the entrances, not that I got a picture of it.

Once I had found my way to the College, I went to a lake area/mall I had passed on the way, which AJ had said was a nice place for a coffee. Once again I chose the McDonalds over the Cheese Pub for an iced latte this time (it was bloomin hot outside) 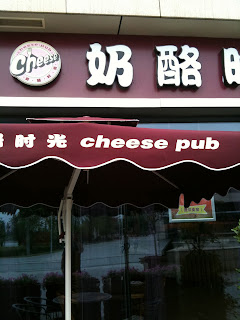 I had a nice iced latte sat outside, the picture at the top of this blog is from this outlet and was a Chocamocha somethinga that someone else was buying.

The whole place was a huge shopping mall, full, or starting to be full of premium European brands such as Calvin Klein etc. 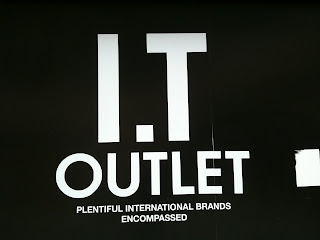 They are indeed 'plentiful'
But the lake is nice. 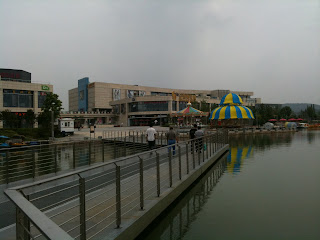 Later, as I got home to the flats I met an American couple Tom and Peggy, who are about my age and who are going to be teaching at the same college, they are on the 4th floor (im on the 6th). We had a bit of a chat and then agreed to hook up later.

Stupid event of the day: Trying to save all my contacts off my iphone to my itunes folder, I deleted the lot. Anyone out there know how to get them back? I did back up the phone a few days ago.

Otherwise friends please send me your contact details, that is if you want to hear from me other than through this blog. (or find me on facebook)
Posted by Rob Burton at 17:54