I am in techno hell.

My iPhone is completely useless, and I have my whole life on my phone. I am distraught. First it was just a simple matter of trying to synch my contacts list into my itunes folder. I clicked the box and pressed the button and all my contacts disappeared off my phone, some of these contact numbers also doubled as my pin numbers for my credit cards and my Internet banking numbers. Fortunately some little voice in my head had made me jot down my two Internet banking access numbers, thank god for pen and paper!

Second my Kindle is buggered as I mentioned before, so I have NOTHING to read. ALL my books and reading was on kindle, I also had audio books on my iphone aarrggh - see the depths of my dispair? I had emailed Amazon, they had replied but said I had to ring their help service. Obviously this meant a call to the UK, so I was looking to buy a phone card so I can use the phone in my flat (which will not allow international calls, Ive tried) But Tom, the American colleague told me about using Skype and buying a skype phone number.  So Ive done that, it was not a lot of money and as the number is registered as a UK number I was able to use the free phone number. I was then able to call my bank for both of my accounts and all that time cost me less than £2 so that was a really useful bit of information.

One of the ongoing problems re the iPhone is that I was using it for taking the photos you have been seeing, I do have my large camera, but its a bit bulky just for general gadding around.  So it looks like I might have to buy a phone here in China, well I suppose its an imperative, because people are already asking me for my China mobile number, so that's going to happen today or tomorrow, and Ill get one with a camera. So no pictures for a bit 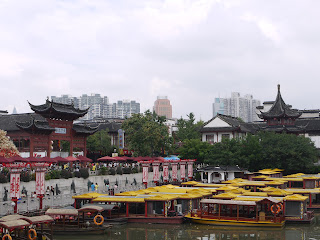 Apart from this one which is Nanjing from earlier in the week
To come up to date, on Thursday, the day after meeting Tom and Peggy we arranged to meet and take a trip into Nanjing to visit Walmart. It seems to be one of the few places one can buy regular size towels, and like me Tom and Peggy are still setting up home and we all needed bits and pieces.

Tom and Peggy were also interested in the fact that I am a vegetarian and wanted to know more about what and how to cook, especially in a wok. Remember we only have one gas burner, no cooker, just the burner and a microwave. So we bought some stuff, Tom telling not to buy anything he wouldn't eat, strong flavours, etc. So he was a bit hesitant when I bought tofu knots and tofu strips, some mushrooms, and seaweed.  That evening in  his flat (it was his birthday too) I cooked the meal, giving Peggy a masterclass in cooking in a wok (coughs modestly). Want to know the secret?

How to cook Chinese in a Wok

1. Get the Wok really hot
2. pour in some good oil, we used sesame it has a hotter smoking point
3. Throw all the bigger stuff in first - ie stuff that may need a little longer to cook
4. Splash some soy sauce in
5. Stir
6. Throw the quick cooking stuff in
7. Maybe a little more soy sauce
8. Stir

Serve with the rice you have just done in the Rice cooker, which was also experimental, because none of us had used a rice cooker before, Richard had given me a 10 second induction, pointed at the button to press and that was the sum total of my training, but it worked.

Have some Sezchwan (sp?) Hot Sauce to add heat.

Friday I spent zooming around a bit trying to understand my locality and get used to where I am, I found my bike shop and the petrol station, which was a result and got a coffee loyalty card from my local McD's (buy 4 get 1 free) - this has become, or is going to become a regular stop, until I can find somewhere else with decent coffee and somewhere to sit outside, now only if the sold the Guardian newspaper that would be almost bliss (bliss would be having my favourite Guardian reading partner here too - hey Lucia?)

In the evening, well mid afternoon at about 3, AJ took us into Nanjing to take us to a couple of Ex Pat bars and to meet some other English Teachers there. So I met us with Sheree, who is a New Zealander and who was going to be a colleague at No1 school before they moved me, I had met her in Beijing. Stephanie, an American that Tom and Peggy (T&P) had met on the flight from Shanghai as they made their way here. There were a couple of other guys, a Brit who was an engineer and in business here and a German guy who owned a bar I think.

Anyway we had a beer and because the bar was mainly selling meaty things like Taco's n stuff I sloped off and had a bowl of noodles at a street stall nearby, again really good, with a chilli paste on the side, a bargain at 5Y (50p ish).  Then we trailed to a couple of other bars one that was dull as ditch water, plus I wasn't drinking, not at about £4 a bottle and then we visited a bierkeller. The beer was even more expensive here. AJ

We got home about 9, having taken a taxi mainly because AJ's Chinese wife was hollering at him on the phone to get home! But all in all it was nice to meet new people and see a different area of Nanjing.

I spent the rest of the evening on the phone, which is where we came in.....

Today (Saturday) we are off to the College for the first time.....