Sunday saw me having my induction from Baruch who is my leader in the college. This took about an hour or so. I was give my time table and was shown around the canteens/restaurants/refectories, whatever you want to call them. As you would expect from a college with over 10,000 students, who all live on campus these are huge. There are two blocks of restaurants, the first has 4 floors, the teachers eat on the second floor, mainly through custom, its not like its a teachers common room or something, students use the second floor also.

After I got back for the college I hopped on the bus and metro and zoomed into Nanjing City to sort out a new phone and a new number.  By now it was about 5 in the afternoon. I wandered around the various phone outlets, until finally deciding on the one AJ told me to get! (I know I know - but regardless AJ gives the BEST advice) Its a Motorola and the overriding reason for getting it is that its a two sim card machine, this means I can have my UK sim and my Chinese sim working simultaneously, so I can get messages calls from the UK and from China on the same phone. It cost 898y, probably about £90. Mind you, it took me about one and a half hours to buy the phone and get the sim. But the kids in the store were really helpful and we communicated via the translator on one of the guys phone. Everyone was having fun and laughing a lot, so it was no hassle - TIC. 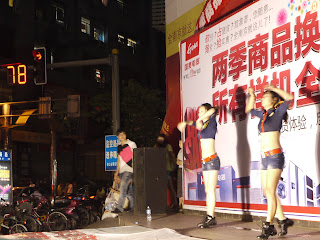 This was going on outside the store where I bought my phone, obviously it didn't influence my choice at all!
I then had a wander around looking for somewhere to eat.
Nanjing at Night 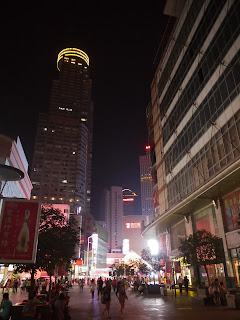 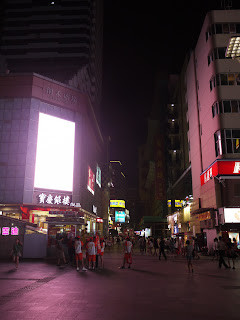 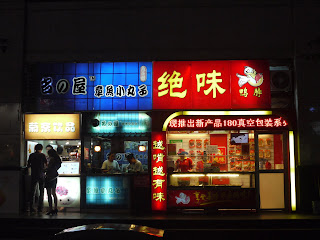 I wandered of the main roads and found a small restaurant where I had another great bowl of noodles and vegetables, chilli sauce and a coke, it cost 10y about £1. Then it was back on the metro and home. 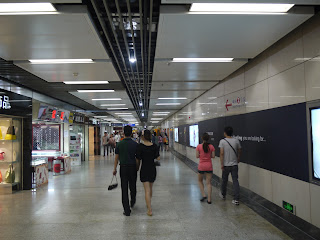 Next day, Monday I was at college - first class 8am!
So I organised the alarm on my new phone, but that  is really quiet. Then I organised the alarm on my old phone, remembering to change it to Chinese time, then I found a UK website that would give me an alarm call on my mobile for 50p.  I was awake at 6:30!
This is my schedule for lessons.
Monday


So that's the three classes I will be teaching. These kids will be graduating this school year and according to my Chinese leader these are the kids with the worst English.

My next teaching is Wednesday, so I have Tuesday off.

I had 18 and 17 kids in my first two classes that were meant to be 22 and 23 strong. The third class is bigger and should have 31 kids. I was pleasantly surprised with the level of English despite these being the 'worst' English students. They were able to answer the simplest questions, although for many I think it is mainly a confidence thing, maybe they have been told they are so bad for so long they are now shy of even attempting to speak English. So I gave loads of praise. These lessons were basically me saying hi, and introducing myself, getting them to introduce themselves, I guess the work starts now as I'll need lesson plans rather than just winging it like I did yesterday.
I had lunch with two American teachers, Matt and Rick. I had a big bowl of noodles, on the second floor, it was delicious (I ignored the fact that the soup was probably a chicken based broth - one has to eat!). It cost 3y about 30p, the meat based soup the guys had was 5y.
I thought it went well I was happy with the dynamics in the class room. I started tough, didn't allow any mobile phones, didn't allow chatter whilst I was talking or working with another student. But as soon as ones back is turned the mobiles are out and the chatter rises. I threatened to put mobiles in my pocket if they were persistent. But in the main I thought it was good and I think the students enjoyed it, I got them laughing anyway.
Lets see if they turn up tomorrow!
Posted by Rob Burton at 19:01