Its the Weekend OM OM OM

Sunday 9:10 am, its sunny with blue skies again, we have been having some pretty days this week. Just back from a run with Peggy.  We do about 3 miles down to the Metro line and back. We run along the road, which is nicely paved, with avenues of trees which we also use for interval training, run ten trees, walk 10 trees, as they are nicely spaced.
I have also mentioned how nicely manicured the environment is and over the last few days all the gaily coloured flags have been removed and teams of workers have been out planting peonies (I think) all along the verge which is now another burst of colour.
Yesterday I took Tom and Peggy, on our bikes to the Temple.  The first objective was to show Tom where the bike mechanic that has a van is and then to find the Temple, which was pretty easy in the end. 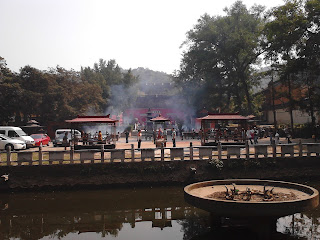 The temple at Qixia, this is where people respect their ancestors, there are turtles in the pool
One of the objectives of taking Tom to the Temple was to try and get him to chill out a bit.  Yesterday when I went to get Peggy to go for a run he was having a bit of a turn. Feeling light headed and dizzy.  So Peggy stayed with Tom and didn’t come for the run.  I think that they were near to calling a Doctor. Anyway later when I got back from the run I dropped in as I had bought him a couple of Bananas to help his blood sugar, he had recovered.  He is stressing a bit about his teaching I think.
Tom is an ‘American Businessman’ through and through. A builder that has lost everything in the Great American Crash. A guy that has always been in charge and in control, successful and I guess rich. A house on the Florida coast - on the beach, pool, boats, cars, the sunshine lifestyle and all. Now he has to be a teacher to kids that are ambivalent about English at best and hopeless at worse, but they know they won’t fail cos Daddy will have paid the right people. And he’s finding it difficult finding the right ‘tone’.
I suffered this too in my first weeks. What I have learnt, and what I have talked to Tom about is not only lowering ones expectations about the students and what they can do. But one has to lower ones personal expectations about oneself.  I guess we all want to be good teachers and we all want the kids to learn. But what if the students can’t be arsed to learn and are just going through the motions? I mean I have not seen half of my classes. I have told my leader and he told me he would ‘keep that in his mind’.
Often despite writing lesson plans one simply has to go off script and go with what the class needs.  For example, last week, I realised that my class was having problems with days of the week. Pretty basic stuff.  I get one of my students to come out and write the day and date on the board it was soon apparent that they were having problems. So the majority of the class was spent doing days of the week and months of the year.  This is with 3rd years students that are graduating this year, 21/22 year olds who should have learnt this in junior school.
So we went to the Temple to take his mind off it a bit, because he seemed to be planning to spend the whole weekend working on schoolwork. Tom is a great ponderer and he needs to work out just what’s going on, so the Temple was an eye-opener to him. He told me that they didn’t have anything like this in the USA. Well I can’t believe that there are no Buddhist temples in the USA and I told him so. 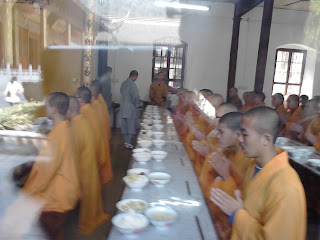 Monks at their lunch, they sang a nice 'prayer' before they ate.
Peggy took to it straight away and was offering respect to the Buddha’s as we went through the halls. The Temple is also in a national park
We walked through the Temple then onto the train that leads up through the trees. Many of the trees seem to be Maple or Japanese Acers, they are still green now, but in a few weeks should start to become fantastically coloured. 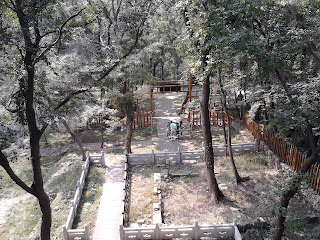 We walked up the steep slope through ruins of Palaces up to a view point and then onto a tea house, where we had to wake up the ‘caretakers’ they didn’t seem to want to offer us tea, but pointed us upstairs, so up four stories we climbed to the roof to be rewarded with fantastic (if smoggy) views over to the Yangtze river, my first view of the river.  And blow me down we are not a million miles away from it, so we will plan to get there soon, probably on the bikes. 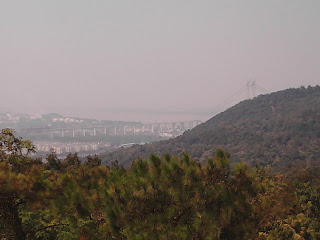 Then it was downhill back to the Temple for a cold drink and away.  Later in the day we watched the Rugby and went to the Metro food market for fried rice and noodles. 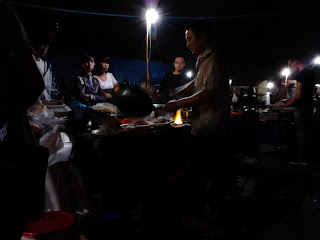 On Friday, which was my day off, I mooched off to the local shopping centre and came upon what seemed to be a performance by school kids, set up outside the local supermarket. So I sat there in the sun for a while watching these cute kids dancing, singing, playing instruments – nice and relaxing. 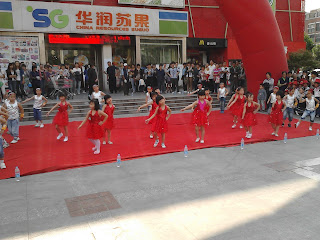 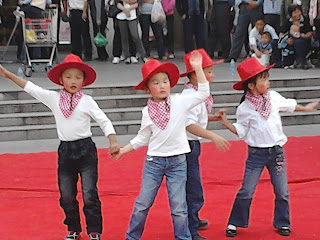 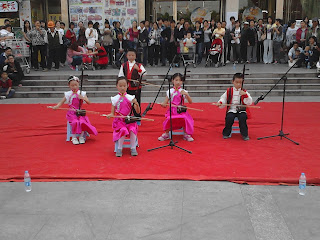 Today I have some school work to do, not too much, but next week sees me doing more hours, I have lost my Tuesday off as that becomes a full day of teaching, as is Monday and Thursday. Wednesday is a couple of hours.  But hey it’s better than what I was doing!!!
Over and Out…………
Posted by Rob Burton at 19:14