Nanjing 9:00 am. The sky is blue (duck eggish), the sun is out, its hot, I’ve been for a run.
Back to work today, first day since last Thursday. It’s been the holidays. At times in the evening it sounds like I am living in Beirut in the mid 70’s (is that date right? – but you know what I mean). The sky is full of fireworks, the Chinese love their fireworks, and so they should as they invented them.  It was the full moon the other day, and the holiday where they eat moon cake is linked to the full moon, so the shoot fireworks in celebration. I gave my moon cakes, given to me as a gift by the college, to the guard on the gate, he seemed pleased and now raises the gate for me before I even have to catch his eye and I get a big smile.
Yesterday was fun. I had to go to the clinic for a full medical. Despite the fact I paid £80 for a medical in the UK so I could get my visa to come to China, this wasn’t enough for the local authorities so I could get my residents visa. (so top tip - bring as much medical info as you can if you are coming to China)  So at 8am yesterday I met up with two Americans, Rick and Todd for the trip into the city. Richard, the international liaison guy at the college turned up with a minibus and we were driven the 1hr to the clinic.
At the clinic we had to fill in forms and because Richard had forgotten our passport photos (TIC) we had to sit in the machine and have them taken again. Richard had to stump up 20y for me as I only had 100y notes.  Then we went upstairs for the various checks. As you can expect, I had to have everything checked, whereas Rick and Todd only had to have a few tests as they had bought some of their original documents with them, ECG’s and the like. I hadn’t been told I need any of this here. All I was told in the UK was to get the Doctor to fill the form in, sign it and stamp it, and that was what I had done.
Anyway, we ended up in a corridor with lots of different doors, with lots of different signs, ECG, Dental, Medical, Scan, ENT, and so on.  I started off at Dental.  Well the examination was pretty negligible.  No latex gloves but he unwrapped a wooden tongue depressor and clicked it quickly around my teeth and I was off.  Next was the Optician. I was sat in front of a sign full of E’s, M’s, and W’s that was quickly rattled off, she had a quick look in my eyes and checked my colour vision and onwards.
Next was blood.  I had already checked that the needle was going to be a new one; I was sharing with no one! They swabbed me with iodine then took half an armful (old joke) in the blink of an eye. I was well onto the conveyor belt now.  Next was the doctor for height, weight, blood pressure (probably up!) and a listen to my chest.
Across the corridor for the ultrasound, stuff smeared all over my belly and off, fortunately it seems I’m not pregnant!  On another couch across the corridor I was wired up, big clips on both wrists and one ankle. Suckers attached to my chest – seems I’m alive - good.  Then a quick blast of X-rays into my chest and we were finished.
All of the examinations were done at top speed and as I have noted were all pretty negligible. Some like the ENT seemed only to check that we actually did have ears a nose and a throat, that’s how basic it was.  Richard told us that the examination cost the College some 350y per exam and that it was a bit of a money making racket for the local authority. There was no real rhyme or reason as to why any of us where chosen. Todd was told his American documents were copies and were therefore not suitable. Todd’s documents were clearly the originals, but TIC!
I spent the rest of the day working at the computer getting my teaching programme up to date.
The good news is that I have sorted my problem out with Amazon re my broken Kindle. I had heard that I could not send electronic items out of China (slightly ironic as most of them are made here). I confirmed this with the local DHL office via the phone, they have English speaking reps. However, they clarified the rules for me and told me that electronic goods can be send but all batteries must be removed.
So it was onto Google to see how to remove the battery. 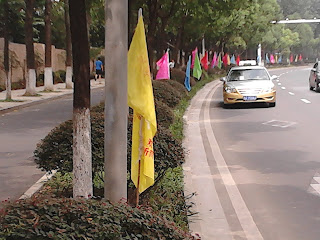 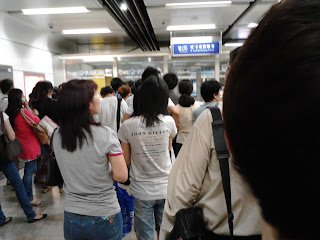 This is the queue to get money put on my Metro card.
Then as it was about 4 ish (on Monday)  and I had had no lunch I searched out a local noodle place and a another plate of noodles and chilli sauce - yum. I better take a photo soon to show you.
Tonight at the College, we are having an event, dinner with the Chinese teachers, then introduced to the Freshmen, I think (tic) , we have been asked to perform!
I'm gonna sing!!!!!!
My one and only party piece only not quite as good as this (and this guy was only 15 when he sang this)
I'll report back next time.
Posted by Rob Burton at 19:10