Nanjing 8:25am Friday, just back from a run.  It’s muggy and misty, but cooler than yesterday.  My god yesterday was HOT. Wednesday was about 34c and yesterday was hotter. The sun was out, no clouds in the sky and it was burning. The girls were all under umbrellas’ and I was sweating my guts out. It didn’t help that I was teaching from 8am to 15:10 in the afternoon. No cooling in the classrooms except for the windows being open and the roof fans turning.  My liquid intake is huge and most of the liquid is exiting as sweat, if you catch my drift.
I guess you are all waiting to hear about my singing debut.  The event was a welcome put on for the new foreign teachers by the students at the college. Not the freshmen (1st years) as they poor devils are being marched around the campus under the unmercyless sun doing their military training.  They seem to start even before I got there on Thursday, which was about 7:15, and they were still at it after I had left at about 3:30. 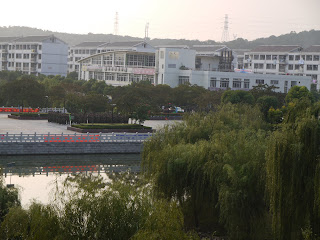 We were asked to be in the office at about 17:00 Wednesday evening where we were to be given a meal. It was a pretty weak event. AJ told me that last year all the teachers were taken to a nice restaurant and treated to a nice meal. My special take away vegetarian meal consisting of rice, two fried eggs, lotus root and some other stuff was taken in my office with AJ for company. The other teachers took theirs in their office too. The food was mediocre.
Then we had to be in the students building at 6ish. I was a bit early. I was sat in the front row, where piles of sweets, biscuits, water and a flappy clapper thing were laid out for us. We were treated to a student band setting up; lots of chords, feedback and the drummer bashing his drums somewhat randomly, typical teenage rock n roll stuff.  This seemed to go on for quite a bit.  Other students and members of staff wandered in and at last the rest of the foreign teachers turned up too. 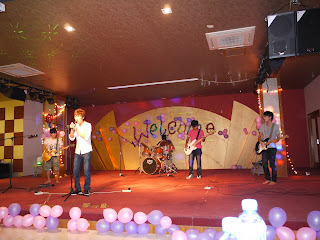 As we settled, the band struck up a noisy tune; the singer sang his song off pieces of paper he had in his hand, losing his place regularly.  They played the one song and left the stage. The feedback was more entertaining, but they tried so well done.
Then a young female student introduced the senior members of staff, the dean and so on.  Then we had to file onto the stage and introduce ourselves. Once that was over the entertainment began. 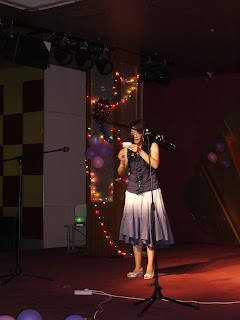 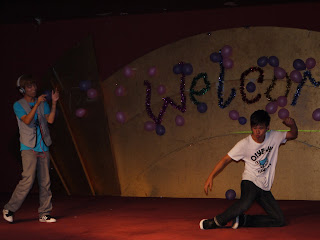 Then a comedy routine in Chinese.
Then Rick doing a Chinese song in Chinese to great acclaim – he was loving it. 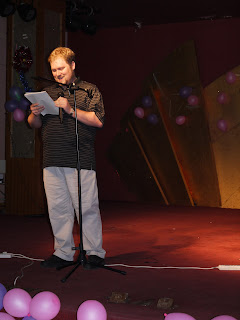 Then Peggy read a poem 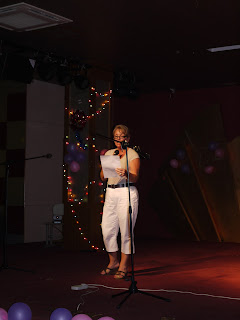 And this student sang a very nice song in english to his teacher, it was sweet and he had a great voice and haircut to match 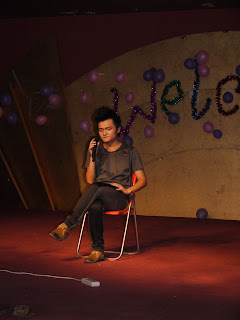 Then Todd who did Bye Bye American Pie but lost it before the verse. 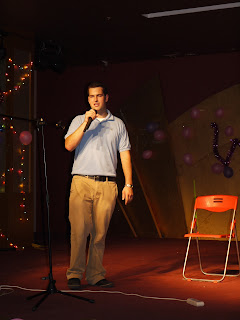 I was sitting next to one of the lead Chinese teachers and it turned out that she didn’t realise that we had all been asked to have something to perform. They had a set list with Rick and Peggy other teachers on it, but Stuart and I (Stuart, a Canadian teacher) were not on the set list.  So as Todd faltered, Stuart was ushered onto the stage where he did a very popular song about Mao in Chinese again to much acclaim. Then I hustled onto the stage and did The House of the Rising Sun which went well I think, (no pics but Tom may have video) the other teachers thought so and Mrs Wu (I think that’s her name) has booked me and Stuart for another student thing next week (maybe tic)
Then the student compare gave us an impromptu piano recital, as she wasn’t on the set list either.  Another guest did a traditional fan dance, which seemed to incorporate kung fu moves and was really good, despite a few hiccups at the beginning. The stage was carpeted and was tripping her and she had to move to the hard floor. 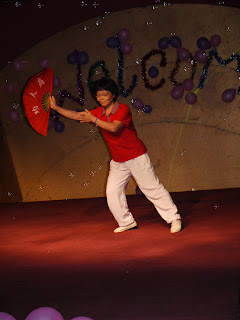 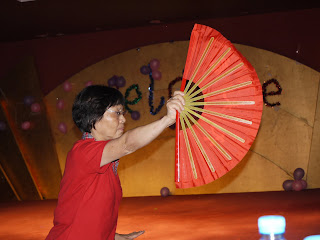 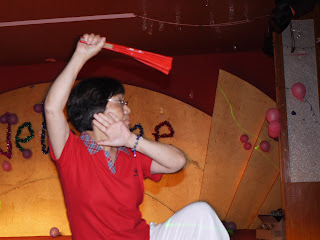 In other news, two more disasters have befallen me.
1.     I dropped my camera and damaged the lens, fortunately the filter took the brunt of the damage so the camera is still working – hence the pictures above.
2.     My lodger has given her notice to leave, more a hassle than a disaster, so I have to post my room again on gumtree.
Other good (?) news is I have been given more teaching. Currently I only have 12 hrs and I am contracted for 16 so they are making up my hours, but they are giving me more so I’ll get paid the difference.  There doesn’t seem to be any option.
Later today AJ is taking me to a traditional bathhouse.  (no its not a brothel by any other name, AJ is married thank you very much)
I’ll report back.
PS woohoo its the weekend! And England are playing in the rugby world cup!
Posted by Rob Burton at 20:19