Autumn is upon us. It’s the mid Autumn festival and the weather is considerably cooler.  The overcast humid days of just last week seem to have gone.  Whilst the sky is still overcast, I think I can count the number of times I have seen a blue sky on one hand. The days are noticeably cooler and there is a breeze. I don’t have the aircon on in the day times; I just have the window open.  Then for the night I might leave the air con on in the other room and that’s enough to keep my two rooms cool enough to sleep. 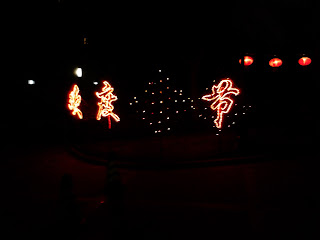 Autumn Festival lights outside my accommodation
The following are just a few impressions of China. I might be wrong and learn more in the coming weeks. These impressions might be influenced by the fact that I am just in one prosperous city and I know this is a big and varied country.  I am simply a worker ant, a speck in this mass of humanity.
I know I am in a communist country. We all know the history of the revolution in China, the great march, the Cultural Revolution, the great leap forward, the great leader Mao.  And yet there is little evidence on the streets that this ever happened. This is totally unlike my experiences in the former Soviet Union, in Ukraine, for example.  The mark of the former soviet times were visible everywhere. From statues of Marx and Lenin on the street, to the hammer and sickle and the red star adorning buildings, vehicles, boats, bridges, imprinted upon the infrastructure of that society.
Here in China, apart from the bank notes I have only seen one image of Mao Zedong, and that was in the restaurant of the hotel where I stayed for the seminar.  Everywhere I have been locally in Nanjing I have not seen one iota of evidence that suggests that one is in a communist society.
The one thing that does catch the eye is the plethora of militaristic style uniforms.  The guards on my flat gates are in uniform as are all the other gated community guards, the metro workers are in uniform, with Sam Browne type belts. Obviously the police wear uniform. The police are less in evidence as I thought they might be.  They are pretty invisible.  Although at most big road junctions there is a manned police box.
We were told yesterday, much to Toms dismay as he had just bought a motorbike, that the police were stopping unlicensed bikes, like the ones we are driving and that it was a 200y on the spot fine and if you didn’t have the cash then they confiscated the bike and you had to go to the station to pick it up. We were told this by another Brit whose son was stopped and fined. Although AJ says he has never been stopped. We decided that in the future we would adopt the Hells Angel approach, which is not to stop at a raised hand and zoom right on past.  They don’t have vehicles to chase us so no problem there – we’ll see)
As I have mentioned, also and posted some pics, the City centre is as modern a place as any European/American city I have ever visited. In fact in some cases more modern, and clean and safe.  The women teachers I have spoken to say they have no problem walking on their own, even walking at night, the Chinese are friendly and helpful. (I think that also that the penalties for some crimes are pretty fierce – i.e. death with no appeal carried out days after the verdict.)
The shops (in Nanjing) are busy, modern and full of stuff, electronic goods, all the big makes and names, clothing, all the major design houses, food in abundance and cheap too.
The impressions of my students are that they seem really young. They are all around 22 and yet compared to my experience of 18 to 21 years olds at the universities where I worked in the UK they seem very immature. They lack confidence, maybe that’s just in front of me as a new foreign teachers. Or as I mentioned it might be because they have been told they are crap at English for so many years they have little confidence in their abilities. At the other end of the scale, students we have met on the street, from other schools, who have demonstrated better English skills seem to be much more confident in approaching us and speaking.
In the area I live there are lots of colleges/universities, down the road is a large International School where the kids of the rich engineers/workers that live in the posher enclaves go. In the new bar where I went to watch the Rugby yesterday (England v Argentina – poor performance England, despite the win) quite a few turned up, I met with a few, but to be honest I don’t really want to hang out with them and many seem to want to keep themselves to themselves. Maybe they are too good to socialise with mere ‘teachers’ even on ‘Teachers Day’. 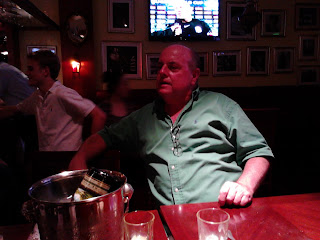 Tom in the Blue Marlin
The Blue Marlin bar is in a small strip mall where you can find a Delicatessen/Baker, where all the westerners seem to go to buy their stuff, and a few doors down from that is another shop that sells ‘occidental food’, mainly American branded stuff – I don’t shop there – I can’t afford it and they have nothing I want to buy/eat! 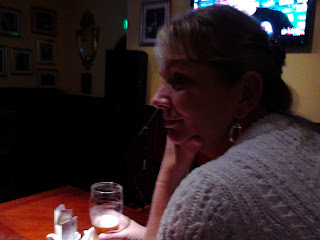 Peggy in the Blue Marlin being initiated into the mysteries of Rugby
On the way back from the Rugby last night, we stopped at a local restaurant so that Tom could have a look at the menu.  They had one in English (one of the benefits I guess of living near a load of expat workers).  We were not sure if we would want to go for the boiled Bullfrog, or the pigs trotters, or some of the other esoteric choices that I have forgotten about, but will look again and bring you up to speed. 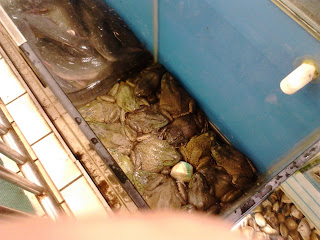 How many Bullfrogs was that you needed for lunch - in the local supermarket?
The local supermarkets, Sugo, have most things we need for eating at home, although I am thinking it is much cheaper to eat out, and provided one can get off ones arse in the evening, it is easy to eat out for about 10y (£1) and as I have mentioned I can eat cheaper than that at the college for lunch. At the moment I hardly have anything in my cupboards or fridge. Last night I had scrambled egg on toast, the scrambled egg made in the microwave at home.  The bread seems to be quite sweet, but for me that works well as toast, I don’t need to make sandwiches or anything like that.
Dairy produce is relatively new to China so I am told, so consequently the Chinese diet is pretty much Dairy free, AJ claims this has cured his asthma, hopefully it might do the same for me and make getting a cold less of an issue for my chest. 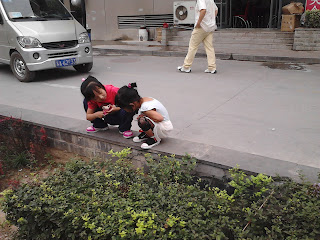 Two girls outside McDonalds
This morning I went with Tom and Peggy to McDonalds because Peggy wanted an egg mcmuffin breakfast.  The guy who was serving me my latte spoke English, so I managed to get an egg mcmuffin ordered without the slice of sausage.  However, when it came, it was just a bun with some shredded cabbage and no egg! That was soon sorted out though and I had my egg Mcmuffin ‘bu ya row’.
Result, but not as good as the Sunday Times, a cafetiere of Coffee and toast and marmalade at home!
Posted by Rob Burton at 06:31