Yesterday was the day we were due to go to the College for the first time.  I had been in Nanjing a whole week and I had heard rumours, via AJ of other teachers living in the same block as me, but I'd never seen any, apart from Tom and Peggy (T&P). One I knew via AJ seemed to be a dour Scot, who didn't respond when AJ met him and said Hi! AJ reckons that this is because he was wearing a pink shirt and probably thinks AJ is gay.  Well I wear pink shirts too, but maybe a little more about AJ.

AJ is LOUD and he will say this himself, so I'm not doing him a disservice in describing him like that, or in the following description, I am sure if he reads this (Hi AJ) he will agree.  I first met him in Beijing at the seminar. He was pointed out to me at breakfast and I went over to introduce myself, as I knew we were to be colleagues, both working for BCIT. We had a quick chat and he was quick to  point out that where we were going was fine and that the work was easy and so on, he talks quiet quickly with only a very slight welsh accent belying his welsh roots.

He quickly gave me a page of instructions, bus routes, contacts and so on.  Over that two days I was busy though and it wasn't until I moved here that Ive got to know him better.  He, himself has told me that people call him a 'force of nature', I don't really like that description. Forces of nature are usually destructive, hurricanes, typhoons, volcanoes and so on. AJ isn't destructive, he is forceful but he seems to use his powers for good.

He works all the time creating a future for his  Chinese wife and children.  But he still has plenty of time to take us out for a meal, take me around, help me buy my bike, show us places to go and so on. Yes it sometimes feels like you don't have much of a choice but having taken his advice it turns about to be a good choice. So for example buying my bike, it all felt a bit rushed. I might have looked around a bit more, considered what was on offer. But as AJ pointed out, the guy we buy from is OK, he'll look after us because we are good business and so on.  I could have looked around, found somewhere else but would I be looked after? And of course getting the bike was totally liberating.

As one would expect from a larger than life character AJ dresses to impress. He wears bright pink shirts (as I do ) has a pink school bag and a variety of funky glasses (some the same as me!). The first time we went to Nanjing city on the metro he was wearing a solar topee pith helmet.

Like this one
He tells me that he is currently in the process of getting some union jack material and having some trousers made out of them.  But he is a very helpful guy, great company and I'm glad Ive met him and that we are going to be colleagues at work. I'm sure Ill learn a lot about work and China via AJ.
Yesterday we were off to college for the first time. AJ lent his scooter (blinged up to the max of course, with extra flashing lights, colours, big bore exhaust, fancy air intake with flashing lights around the mouth and so on, you can imagine) to T&P. It takes about 16 minutes to get from our front door to the college by scooter, about an hour by bus.
Yesterday was really busy on the roads, all the kids were turning up at their schools. If you remember I live in an area densely populated with loads of universities and colleges. All of the students live on campus, it seems to be the law/regulation, so the roads were actually jammed. We traveled on down the cycle lanes with no problems.
We were due at the college at 2pm. This time had been subject to a lot of speculation, hearsay and misinformation. No one from the college seemed to be contacting us directly. We had a message from AJ first and we were told that we had to be at the college at 8am Saturday morning. As we hadn't heard anything officially I rang Richard the colleges international liaison. He told me he didn't know as he hadn't spoken to the teachers, but he would email us all.
Then we heard that the time was now 4pm in the afternoon. Tom had also rung Richard but we were still unsure as to really what the time we needed was.  Finally at about 8pm Friday evening when we were all in a bierkeller in Nanjing AJ got a call from Richard who told him we needed to be at the college at 2pm on Saturday afternoon.  Well OK that seemed pretty definitive.
So suited and booted, well looking a bit nicer than usual, we turned up at the gates of the college where Richard had said he would meet us. We were about 20 minutes early as we didn't want to give a bad impression. Apparently being late is a huge black mark against you here, especially for lessons. They tell us its basically 3 strikes and you are out. 3 late attendances to you class and the college will  not employ you again.
When Richard turned up he looked surprised to see me. 'What are you doing here' he asked. I told him AJ told me that he had told AJ
There were about another 8 or 10 teachers, mainly Americans plus the Scot. I am actually in another group, with another leader. This is because AJ and myself will be teaching the British Columbia Institute of Technology programme, where as the other are teaching the standard English programmes.
Later I took a few photos of the campus 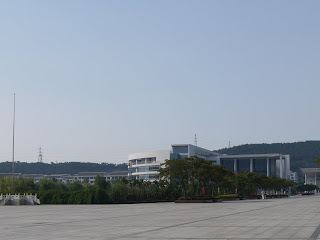 This is the library block with student accommodation behind it 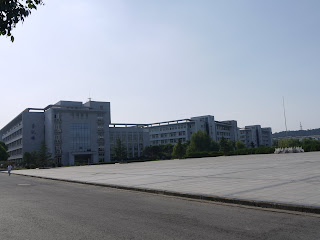 This, I think, is places where companies have factories and stuff where the students do on job training 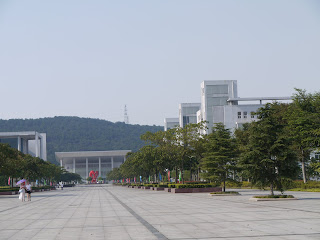 In the background is the gym and refectory/canteen. The blocks on the right are the teaching blocks, we are in the third on the right. 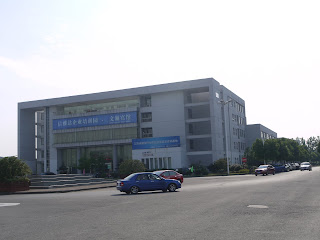 This is a hotel on site, for businessmen attending the College 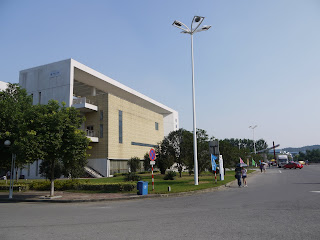 This is the admin block where Richard works looking towards the entrance to the college
Later that evening we, me and T&P, went out to the hotpot place I went earlier in the week and met with three of the American teachers, a guy called Kevin, (who comes from Winscombe in Somerset) which is near where I lived and he knew the place where I used to work) and his Chinese wife, James, the Chinese teacher and AJ. A good time was had by all and it cost us 30y (about £3) each.

It turned out that Tom had chatted to the dour Scot and asked him why he had ignored AJ, he told Tom that he thought the guy was looking for a boyfriend!  Hey Ho Pink Shirts rule!
So back to college today - but hey TIC!
Posted by Rob Burton at 17:46