The roar of the greasepaint the smell of the crowd

Friday morning, 10:20am, its my day off, I’ve just been for a run.  The weather is nice again after the last few chilly days.  We now have blue skies and sunshine and nice warm temperatures.  Running was a bit hard today. We had a foreign teachers dinner last night, put on by our department at the college so I had a few beers, more than is usual for me. 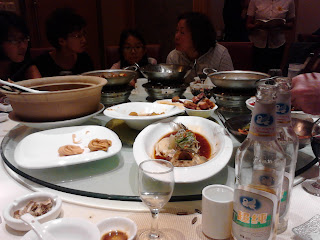 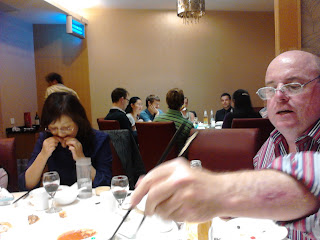 It was fun, but these things are always put on really early, so it started at about 5:30 and was finished by 7:30.  The younger teachers had plans to go into the city where a bar was offering free beer.  Tom, Peggy and myself retired to the Blue Marlin for a final beer, but I was still home by about 8:30! 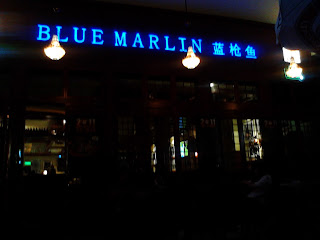 I bet you are all desperate to hear about my concert debut. 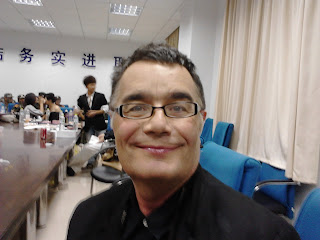 This is me in makeup! I’m afraid I’m looking a bit ‘Quentin Crisp’, a bit like some pervy old transvestite! Yes that is lip-gloss! We didn’t have much option. We turned up at 5:30 as requested at the stage area (it was outside on the sports field) and were escorted into what I guess we could call the ‘green room’ where we were given a meal and a can of coke. Then we were ushered into the makeup chair. All the dancing girls thought it was hilarious and were all taking our photos on their phones. 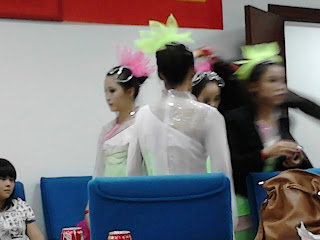 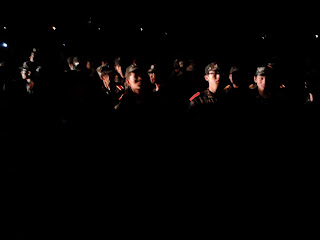 The programme was a mix of students doing their turns, singing, Chinese fan dancing, a magician and so on and in between these acts, military choirs from each, i'll call them 'regiments' representing their faculty came up and sang what I can only suppose were patriotic songs, there was a lot of flag waving and socialist realist style stances. 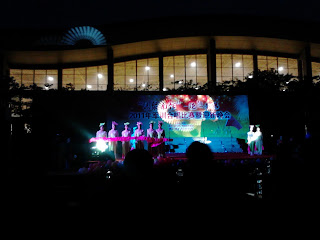 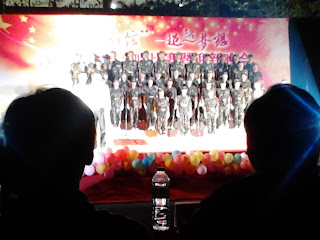 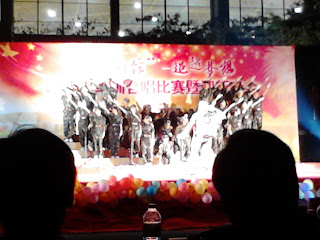 And, of course, there was us. 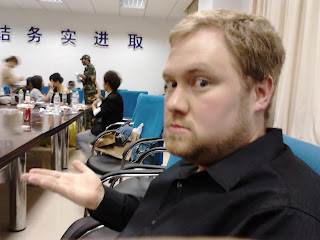 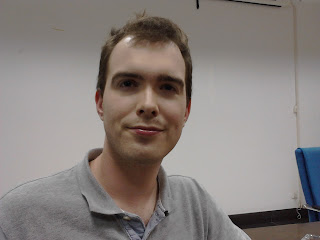 
and me. And, if you have stopped laughing you have already seen my picture!
As I think I may have mentioned Rick and Stuart were singing Chinese songs in Chinese, they have worked in China previously and/or have studied Chinese as a degree subject. Stuart has a Chinese girlfriend.  I was singing The House of the Rising Sun, previously made famous by Eric Burden when he was a 15yr old in The Animals.
We were on a bit later in the programme and I enjoyed watching the show and then we were taken out of our seats and stuck in between two columns (choirs) of the student red army.
And then we were on.
I, of course, had dressed for the part. Black jeans, Black shirt, Black jacket and I was wearing my sunglasses (its was dark by now).  We had to introduce ourselves, with an accompanying Chinese translation, plus we had to say a few words of encouragement. In keeping with my ‘turn’ I chose a BB King quote ‘ The beautiful thing about learning is that no one can take it away from you’
Rick was the first one to introduce himself;  “Hi, I’m Rick, I’m an American…. blah blah blah….” Then it was me.
I had the microphone, I threw my fist into the air and screamed “GOOOOOOD EVEEEEEENING NAAAAAANJING!!!!’ – well you have to don’t you? The 4000 students, did I mention there were 4000 freshmen watching us in serried ranks out in the dark on the playing field, plus the assembled guests and many other people milling about.  The 4000 freshmen roared back at me…..erm what I don’t know, I think it was a cheer although I’m sort of pleased that their military training doesn’t involve guns of any sort.
Then Stuart had his turn and we were off singing, first Rick, then me, but strangely they only let us sing half our songs. I did think it was funny that Ricks song didn’t seem as long as it usually did, but cos I was on stage I couldn’t worry about it too much as it was my turn next and it was only when I was launching into the bit that goes,  “Oh Mother, tell your children….” That I was rudely cut off by the compare and then it was Stuart’s turn with his popular Mao song.
And then it was time for a bow, I saluted the military students and we were off. It was great fun and I think all three of us enjoyed it and perhaps we will benefit from our notoriety in the classroom and further afield. In fact Richard, the Foreign Teacher Liaison told me I looked ‘very beautiful’.  This wasn’t a gay come on, it is a common, well not mistake, but just a common way of giving a complement.  Although Richard is a bit, erm, fey, if you know what I mean, although he is married with a child. (On the night in question I tried to take his photo but he panicked and said no because he ‘wasn’t looking beautiful’!)  A lot of the Chinese men are like that and its common for them to have their arms around each other and be a bit touchy feely. 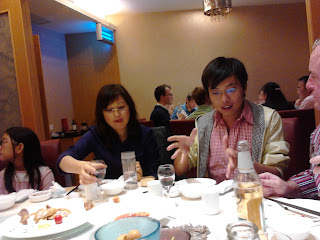