Its Friday, I have a day off, in fact I have five days off, I'm not due back in college until Wednesday. This weekend including Monday is the Mid Autumn Festival and Saturday is 'Teachers Day'

Held every year on Sept 10th the Teachers Day festival was initiated in 1985 as a reminder that teachers should be held in reverence for instilling knowledge and morals in students. It also serves as a reminder to teachers that they, popularly known as engineers of the human soul, need to reflect on their self-improvement in terms of knowledge and personal integrity.  You can read about the mid autumn festival here
The first week of any term is hectic, getting to know the students, getting to know the routines of the college, the other teachers, the syllabus and so on. I think things have many gone well. The students have been turning up, well about 50% of the students have been turning up.  All my students, across the three classes, are in their final year, so there is little motivation to turn up, even though they are required to 'by law' and will fail their course if they are away for more than one third of the classes. Despite this they are not turning up. Also I was told that these students were the 'worst English students' of their year.
However, despite being described to me as being the 'worst students' I have been pleasantly surprised by their level of understanding and their ability. However, the English does have to be forced from them. Most of them, especially the girls, are painfully shy, and most, including the boys will look down and mumble their responses.  This is, I think, a reaction to probably about 10 years of being told that they are crap. Remember Chinese English teachers seem to be much more forceful than us and they seem to brook NO mistakes from their students. Whereas one of our techniques is to give them LOTS of praise for their small successes.
In other news, I had to take my scooter back to the mechanic after the front brakes dropped off. Only a minor problem you understand, especially as I had Tom the American on the back at the time! Plus the rear brakes had suddenly become almost none existent. Fortunately I didn't have to drive far with no brakes, and they were fixed immediately, while I waited, No 'it'll be ready in two weeks' here. I also had a small problem with it not starting - this turned out to be a human interface problem - soon solved!
AJ took me to a huge store full of computer/tech shops, hundreds of them in one big store, all little, the counters about 1 metre wide in some cases. Selling everything from repairs, to laser pointers, mice, keyboards, fans, every make of computer and laptop and probably their clones and copies. But the good news is there is a guy, that speaks English, who reckons he can fix my iphone! I'm going into the city today so we will see.
Speaking of AJ, here he is 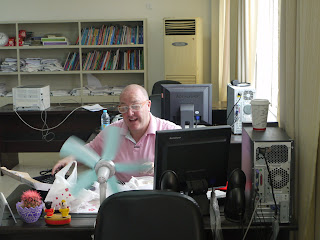 And again with a view of my desk behind AJ's 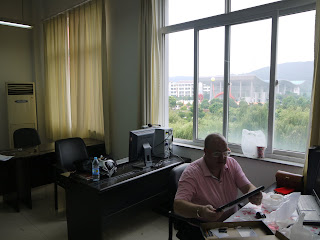 AJ looking at some of the kit he bought in the computer store the day before, my helmet on my desk.
The view out of the window 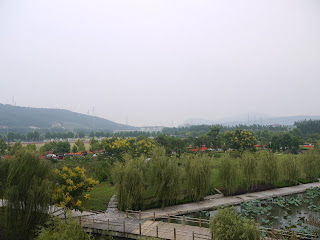 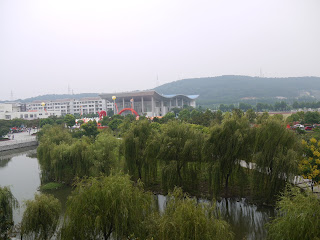 Apparently the campus is one of the best Green campuses in the country (I think, it could be the district though), but its very nice, huge and green with manicured gardens, as there are in most places. So, for example, around my block of flats, everything is spotless and the gardens are perfectly manicured. Indeed the whole of Nanjing is spotless, there is no litter, and there are armies of people sweeping the streets,  and picking up any rubbish that is dropped. The metro is also spotless. (That is apart from the small kids and babies allowed to pee and poop anywhere and everywhere, but most parents do clean it up)
The weather seems to have cooled down a bit, I went for a run this morning and it was much easier and cooler. I'm told we are in for about a 2 month Autumn and about a 4 month winter. Its raining at the moment.
The good news is the Rugby World Cup starts today - hurrah! Im off into town today to meet some teachers to watch the first game, New Zealand v Tonga in NZ, then tomorrow to a local bar with AJ to watch England v Argentina. The local bar is brand new and is called the Blue Marlin, its got three big screens and we've reserved the table right in front of the screen - woohoo.  We are taking Tom and Peggy to introduce them to the game! Peggy being a one time cheerleader for her college football team!
Food is going OK, the college canteens are great, as I have mentioned. I'm not having any major problem being a vegetarian, lots of good grub. I think I have to sometimes turn a blind stomach to the fact that the broths might have a chicken stock base. It hasn't been evident and I have no proof, its just a bit suspicious, and I notice the servers will use the same ladle for all the dishes, so when she ladles my stuff, she might have just been ladling a meaty dish. I just pile on the chilli sauce and burn it all away! Oh I also found breakfast at the college yesterday, I was told by my Chinese leader they didn't do breakfast, but of course AJ knew different. I had a sort of eggy bread/pancaky thing sold by weight, it was great, all they need to provide now is a decent coffee and we would be sorted.
WalMart shop trying to find chicken breast that approximated his American experience of chicken breast. He was suspicious of me telling him how nice Pak Choi and seaweed was and told me he didn't wanted to eat anything with a strange taste!  A man who had never tasted tofu (although they did know about that flaccid white stuff we get in the US and UK, which bears no resemblance to the tofu we now know and love, especially the tofu Knots) who now puts it into each meal he cooks. He has even done rice in the rice steamer! (although that might be more about men and machines)
A pack of ground coffee is about £10, and the only cafetiere I have seen was about £50! But that was in a posh sort of shop. So coffee is in short supply. I actually bought a can of coffee drink at the supermarket yesterday - it was OK but a bit small.
Next week, we have a teachers party in our honour, with the students I think, on Wednesday evening. We have to perform!
I am going to sing!
Ha!
Posted by Rob Burton at 19:46