Dinner with the big bosses.

Friday Morning about 8:10 am my phone rings.

'Now. I am waiting for you outside of your apartment'

Five minutes later I am being introduced to all the teachers of the school in a large lecture theatre where they are all getting an induction. Then I had to sit though over an hour of speeches by the bosses, all in Chinese of course, before I could escape during a break. I spoke to a Chinese teacher later, they had to sit through another hour and a half of it after the break. 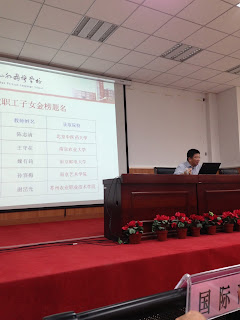 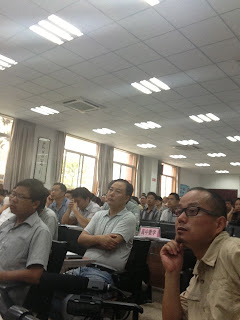 This is the sort of thing that happens in China. You never get any notice of whats going to happen, or as happened later in the day the notice given is basically like a rule of thumb (in the last blog I mentioned Emma and her 8am arrival). I had been told that the dinner for new English teachers was on Friday and I'd be called for at 6:30pm.  So at about 4pm I went for a run (in preparation for eating a lot). I ran for about 40 minutes then sat had a drink and cooled off so eventually got in the shower to get ready at about 5:10. Having showered and just had a shave the phone went.

'Rob? Its Ann (the vice director) Come to the office now for dinner'.

Rushes around ironing shirts and getting dressed

So I get to the office at about 5:30pm and we go up to the restaurant. (its on top of the three story school canteen, its basically a private room thats used for formal dinners, cooked I guess in the school kitchens by their staff, but there is a formal waitress or fuyan as called in Chinese). At the restaurant the really big bosses of the school are there waiting for me with all the other new English teachers.

Time is strange concept in China.

But back to what I've been up to. Me and Snooks did our first run on Thursday. Using an App on my phone I discovered that the perimeter road around the school (but within the walls) is about 1k. On Thursday it was hot and humid and Snooks only managed 1k before flagging so far behind me that I put her back into the air con coolness of the apartment. I managed 5k though which I was pleased with as its the first run I've done in a few weeks.

I also went out and got spare keys cut for my apartment. 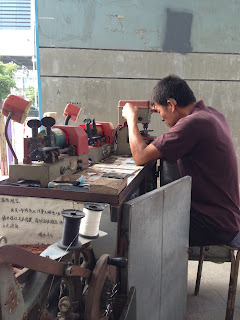 This is the area where I do my shopping. I have to take the bus (No 90) and travel about 4 stops.
This is the supermarket called 'Suguo' which has pretty much of everything, food, hard wear, clothes, bikes, electric bikes and so on. 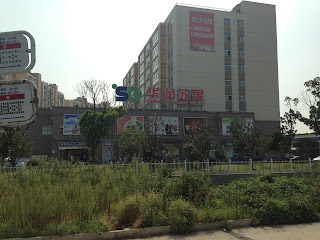 This is the other side of the road, in the building on the left is a fruit, veg and meat market with independent traders, also noodle makers and hardwear shops. 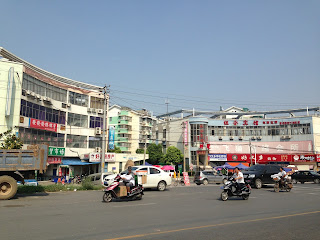 A view down the street 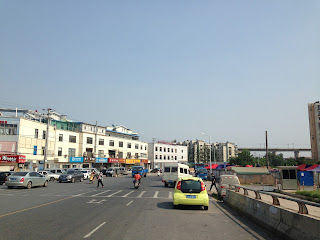 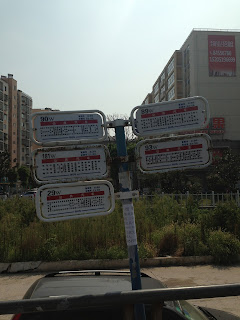 The bus, the fare on Nanjing buses is 1 yuan (about 10p) anywhere on that route if you change buses its another 1 yuan 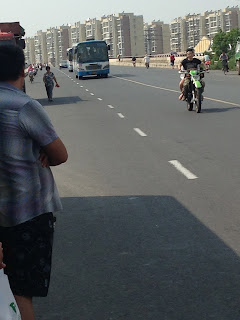 Then after shopping, I had a run, another 5k without Snooks this time. And it was time for dinner.


This is Ann, my immediate Chinese boss (Not a flattering pic Im afraid) She's spent time in Australia so her English is good. Shes a teacher also. The other people are new English teachers. 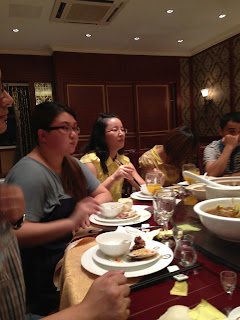 This is Charlie in the foreground (The Big Boss of the school, good english) Then the main big boss and the woman is the CEO 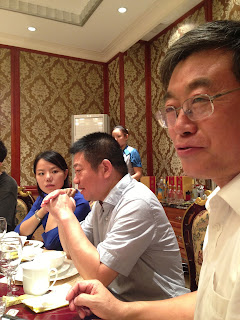 This is Sam, seems a really nice guy, very good English, works at the main office of Linkfun, the people I work for. 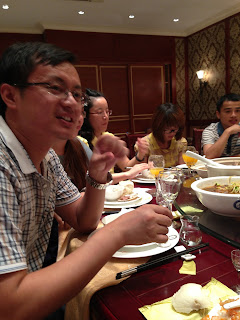 Guy on the right is Scott a Canadian who is going to be teaching at my school, he currently lives in Nanjing City with his girlfriend 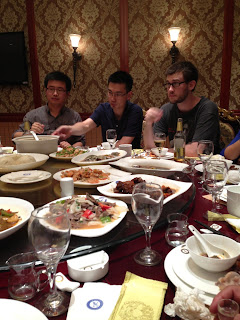 Food was plentiful and nice, I ate fish and meat but also lots of veg  - it was very delicious. I opted for beer instead of the lethal Bijou. I decided to start as I mean to go on. At these formal dinners there are interminable toasts, a bit like the Russian tradition with Vodka, but then they go onto 'Gambay' which is 'down in one' and they move on from the thimble sized glasses (just to the left of my beer) to the small jugs (next to the wine glass) 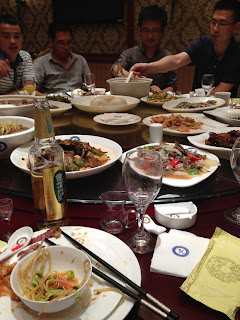 There was a whole range of food, some of which I didn't taste and only found out the next day what some of it was. There was frog (didn't taste but had new fruits off the plate), apparently there was turtle, I didn't see that, duck, eel, chicken, beef, prawns, shellfish, tofu, two kinds of fish, a liver dish, a kidney dish, sort of pickled cucumbers, a nice 'green' dish of a vegetable, tofu strips and chilli, the bean shoot in my bowl came from another dish I don't know what was in it, steamed bread rolls you can see on far side of table. So quite a feast.

Yesterday (Saturday) I did some work for my classes, then took Snooks for a longish walk around the local district which is mainly car dealerships, so not as interesting as the Dongshan Road we walked down the other evening.

When we came back I went to my office to get my teaching schedule.  I have thirteen classes which amount to about 9 hours work a week. Im teaching the Junior A class and the Senior A class, but the thirteen lessons are split all over the shop and of course I also want to do a bit of teaching on the side at SouthEast University, Ive sent them my schedule hoping they can fit me in. Ive spoken to Stephen, my colleague and we are going to try and re-organise our schedule so we have at least on whole day off, as at the moment we are teaching everyday but that might mean I teach the 1st period 8:00 - 8:45 then nothing until the last but one period -15:35-16:20 later the same day.

While I was waiting and chatting with Ann I mentioned I might like to get an electric scooter. She mentioned one of the teachers had just purchased one so she rang him up and he came around and took me on the bus to the dealership where we had a look at some bikes on offer.  I saw some guy with just the one I would like, wide swept handlebars, chrome headlight, very swish but expensive at about 4000y. I'm pretty sure that the first time I parked it at the Metro is would dissapear, so I think Im going to have to buy a bog standard, anonymous bike for about 2500 yuan.

Today (Sunday) Im going for a run now (its about 10am) then later this afternoon me and Snooks will be taking the Metro to see Tom and Peggy my American friends who are back in country. This will be a minor adventure as where I am in Dongshan is a long way from Xianlin where I used to live, so we have to get a taxi to the Metro 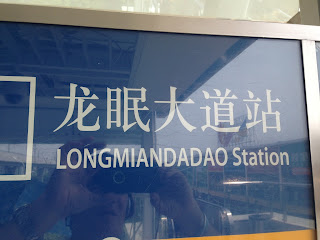 Then go all the way into Nanjing (I'm on Line 1) change to Line 2 all the way to the Xianhemen stop its probably going to take me the best part of 90 minutes.  But it will be cool to see my old friends again.