Whenever you organise anything in China you have to assume that it might happen as organised, it might happen later on, it might happen tomorrow or it might not happen at all, ever, and no one will ever speak of it ever again. Its a bit like the Spanish 'mañana'  or the Cornish 'Drekly' but a bit more complicated.

I got myself into Nanjing for 1 o clock as organised to find that I was going to be escorted by another teacher and not the agency foreign affairs person and this new person didn't really know where we were going. However, once we got off the Metro at the required stop I recognised where we were and got us there.

We were late, it was closed. Medical examinations only happen in the morning.

This is despite me telling the agency person that we needed to be there early. It had originally been planned for us to go after the training at 4am on Tuesday but I was reminded by the other ex pat teachers that the medical place only opened in the morning. So I told the woman but she said no 1 o clock would be OK - so stupidly I believed here.

So that was a wasted journey but I took the opportunity to get into the Walmart in town for a few things and I learnt the nearest Metro station to my school.

Back at the school, it was a hot and humid day and it had been arranged that I would go to see the students at 7:30.  These students start school at 8 am in the morning and are still in the classroom at 9:30 pm. British kids would absolutely die. They also get homework.

But after a cuppa I decided that Snooks had been cooped up enough this last few days so we went out to explore. We walked through a local shopping street that I had been through on the bus. Its a bit of a rough and ready neighbourhood, but I'd seen a couple of electric bike sellers and wanted to check out the prices.

Snooks soon got to meet Chinese Dogs. Not nose to nose, but within barking distance. This one was barking a bit, but Snooks took no notice, maybe it was barking in Chinese! 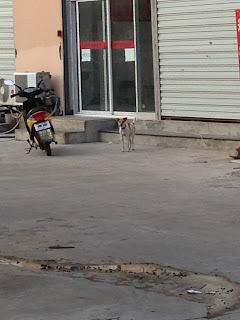 This is looking across a pond at an area that is cultivated - its about 5:30ish in this picture. People working the fields - every bit of local land is used for cultivation and I think most of the vegetables, such as Pak Choi are sold locally in the shops and supermarkets 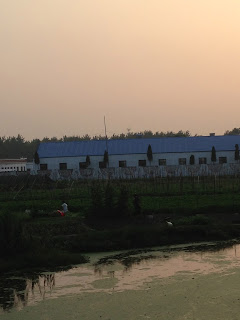 This is the road I was walking along 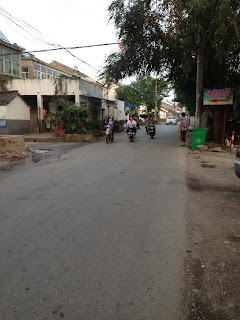 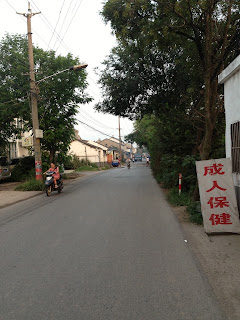 Guy taking it easy on his hammock. 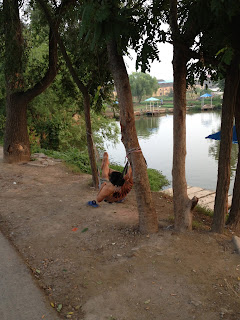 On our way back we popped into the local shop and picked up some water and a sweeper and dustpan for the fur problem. I've got wooden floors and no hoover and I'm not buying one.

Later at 7:30 I went over and was introduced to my classes. Ive two senior classes I think. They are about 14 or 15 and one junior class, Im not sure how old they are. I introduced my self and shhowed them where I come from then had a bit of a question and answer session. I was asked things like how old was I? Did I like cats? One kid wanted to know where I got my jacket from and thought I was a 'fashion guy'! The senior class fell apart when they saw my mis matched, stripy, colourful socks (Primark) and I got a round of applause.

So that looks like its going to be good fun and I look forward to teaching them.

Well I was at the school gate at 7.55 am. By then its hot and humid, the sun is shining.  I had to wait in the shade watching the kids turn up for the new term with their bedding and belonging. 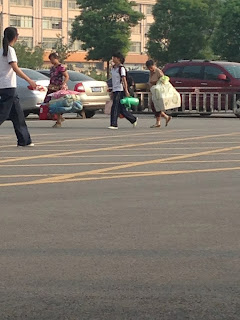 Some turned up with their parents on pushbikes, scooters, motorbikes, taxis and a few rich parents in 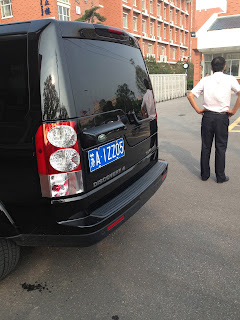 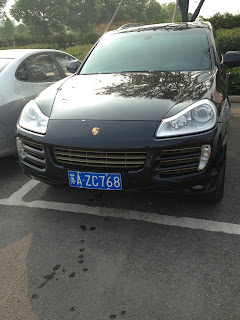 Of course the agent didn't turn up at 8. She managed to get there at about 8:30 am. Anyway we got to the medical place and all went swimmingly. I paid my 450 yuan (about £50 - I'll get it reimbursed in two months) and seemingly passed all my tests (except the ones we're waiting for the results). Basically they did blood pressure, listened to my chest, tested my eyes throat and ears. Ultrasounded my abdomen, wired me up to a machine and checked my heart, took blood and xrayed my chest.

Once out of there we went to the bank and opened a bank account so they can pay me. Then it was back on the metro and off back to school.

At the Metro stop I use I had a mooch around the shops. I found an art materials place so I might do some painting.  Then I stopped for lunch at a local place. 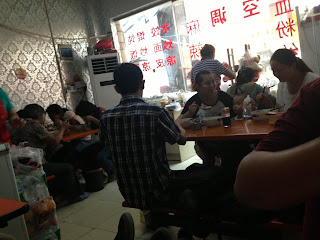 This is the Chow Mein I had - basically stir fried noodles with egg and vegetables and very nice it was too, if not huge and cost 6 yuan or about 0.75p 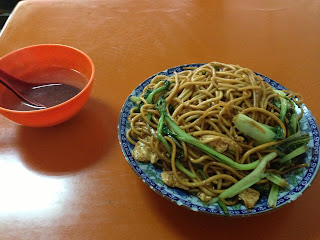 This is the chef in his out door kitchen! 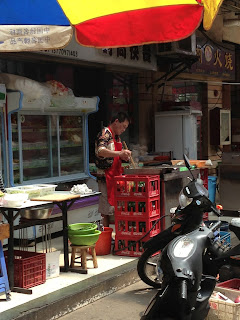 Then back to the school campus.

After that big plate of noodles, my early start and the humid heat of the day I had a bit of a snooze, then took Snooks out for a run. It was really hot and even off the lead she was flagging behind me, so after one circuit of the campus (1k), I popped her back into the air con luxury of the flat and then I continued on and did 5k which I'm very pleased to have done even though it was so hot n humid.

Tomorrow theres a dinner planned for the teachers. My colleague, Steve is still in Shanghai so I wonder if he will be back.

Anyway tomorrows another day and as I said at the top of the blog, the best laid plans and all....