A busy week in Dongshan which ends well with birthday cake!

It's Sunday morning and my first day off in 7 days so a busy week starting with the moon cake and birthday cake at the start of the week and ended with more birthday cake yesterday. One more day of teaching tomorrow and then a weeks holiday for the Chinese National Day holiday.  I love China and their surfeit of holidays.

My teaching week here at Dongshan was actually no busier than usual except for the Monday evening classes I wrote about below.

One of the main highlights at school was that our International Section (total of about 65 students out of 3000+) have received their new Autumn uniform and very smart it is too - here's Lynn modelling it. 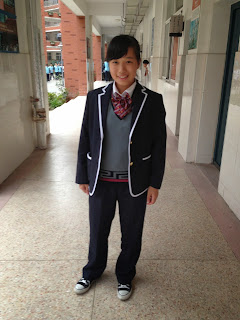 But, because of rain we had early in the week and the fact I had no food in my cupboards which meant I ate in the school canteen, I hadn't been for a run since last Thursday.  Despite me not being the traditionally athletic type when I don't go for a run, once I'm in the groove, I start to feel it. I can feel the energy building up inside of me and I need to release it and as there are no other 'outlets' available to me I have to run.

So on Thursday I pretty much felt that I was going to do my normal 5k but I wanted to push it a bit further with the view of eventually going for a 10k run. But the weather was perfect for running and I felt fit and full of energy so blow me down I did the full 10k which I was pleased with.

But the next day I was invited to go swimming which I thought would be good. It would ease my stiff legs and would be fun. So at 11:30 I was picked up and off we went to the Mystical Health Swimming Club and very nice it was too. But what my host had forgotten to tell me was that previously they had been a professional swimmer on the China team!  So while they ploughed up and down the Olympic sized pool, I fought to keep our end up and valiantly did lengths I think I did about 12, I might have been a bit more or a bit less.  At one time the lifeguard asked me if I was tired and needed a rest. I think they are there for more than just diving in if they see someone in trouble, perhaps they are being more proactive so the don't have to dive in to save struggling laowai (foreigners). I spent much of Friday evening in the recovery position on my bed with a book and a can of Tsingtao beer!

But more fun was in store for Saturday. I was up at the crack of dawn to get ready to go teaching in downtown Nanjing as I have been doing for the last few weeks. I had already been told that if I stayed later that evening I would get extra pay as there was a party. So thats a bonus for a start being paid to go to a party! I wasn't sure what the party was for though.

At 7:15 I jumped on the bus. This was a new adventure as we had just found out that the 18 bus takes us to the Metro stop at Herdingqiou near the big Auchan store (French owned supermarket). Normally I  had been hanging about outside of the school hoping for a taxi to turn up. Our school is not on a particularly busy street so waiting for the taxi was a bit hit or miss, but the buses are the life blood of Chinas streets they always turn up!

As expected the bus turned up in a few minutes and soon I was at Auchan and on the Metro into town. The taxi trip is about 20y whilst the bus is about 2y so a big saving and the bus only took about 5 minutes more than the taxi so thats a good find.

School work was fun as it always is with the kids aged from about 6 to 10. And soon it was time for the party. The party turned out to be a birthday party for one or a couple of the kids, I didn't actually find out, although I did ask.  I think I was there so that the parents could see a foreign teacher close up. I was the only foreign teacher in attendance even though I know they have one other, there maybe more during the week, but I'm just the 'Saturday Girl'.

It was a party like any other party apart from the kids were sat in serried ranks and held their hands up to answer a question and stood to attention if chosen to answer. But there was still a lot of shouting, fun, excitement, cake, singing Happy Birthday and playing games - Simon Says and a version of Pass the Parcel, where they passed a pen to music, when it stopped the winner came out and chose someone, that someone then had to do their party trick and then I had to pop a chosen ballon which had gift promises or sweets in.


The place was decorated with balloons and the usual accoutriemnts 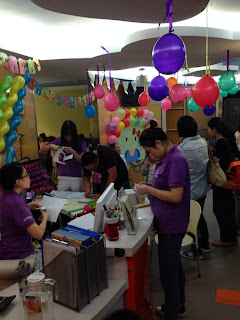 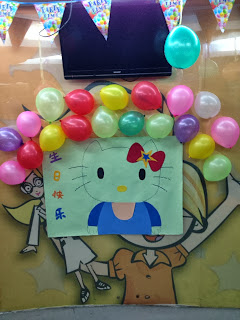 Waiting for the party in a classroom 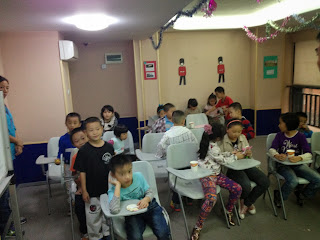 Co Co was the youngest and cute 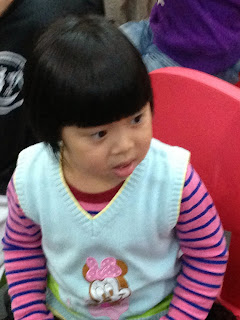 This is Mary - very good English, cute and loves cake 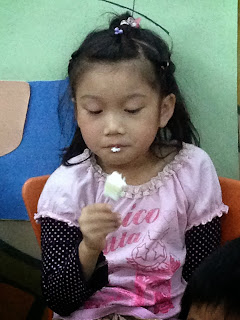 Jonathan in the yellow, his dads a famous cardiologist in China, Linda to the right - very precocious at 6 with very good English, 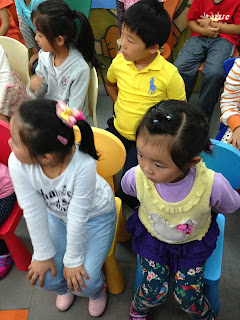 Parents stayed in the background 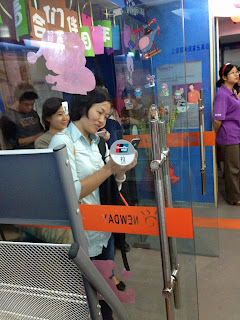 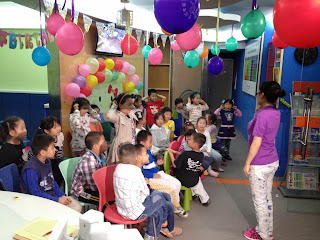 CoCo was desperate to be picked for the games, but was often overlooked cos she was so small, I made sure she got a prize 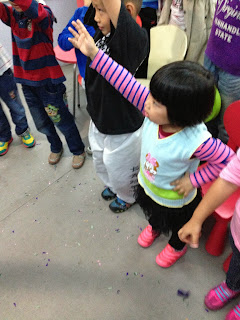 The party in 'full swing' no need for sleeping lions here. 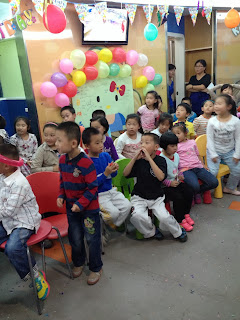 CoCo loves cake too - she had two servings 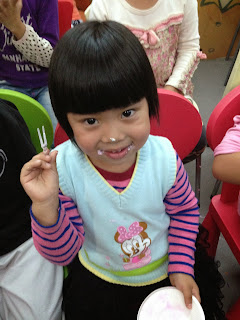 Another fan of cake 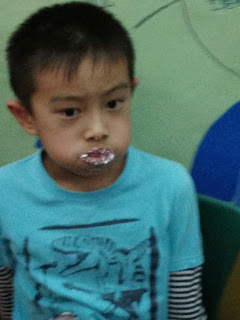 Compilation of short clips of the party

Linda deserves her own clip, her party trick is to sing We are Family, remember she's 6!


The party didn't finish until about 7pm. I was pretty tired by then having been up since 6am. My feet were killing me, I hadn't had much to eat, despite the cake,  so was starving too. Snooks had been home all day, but fortunately Stephen was around so he let her out a couple of times.

So off to the Metro, along the way I met with a woman called Kate, that I'd bumped into a couple of weeks ago when I had Snooks with me, she has two dogs, a pug and a hound called 'Snooby'!  I had a chat with her and her husband. Got the Metro to Auchan, got myself a Veggie Subway to eat on the bus. But the bus didn't come! I think it stops after 7:30pm!   Anyway I jumped in a taxi and was home for 9 - a LONG day.