Saturday 15th October, Its sunny with blue skies. Just been for a run with Peggy, 7k, first one after my cold so I was pleased to do it without dying!  Will do some shopping later with Tom and Peggy, then its watching the rugby, Wales v France.  I’m so pleased that the kind men at the World Rugby Federation organised the matches so they come on during the Blue Marlins happy hour.
Back to my holiday. We were up early to catch the minibus back down the mountain. This time we had insisted that we had a minibus to ourselves as the trip up was a bit of a squash.  The trip downhill was pretty uneventful, obviously lots to see in terms of the views across the valleys and as we went through the small towns and villages that were just waking up.  People were eating their breakfasts outside their houses, brushing their teeth, washing their hair, trudging off to work with tools over their shoulders. The butchers had new cuts of meat on their counters, AJ says that if we were earlier we would have seen them slaughtering the pigs on the street ready for the days fresh supply. 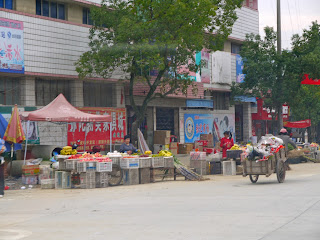 Outside many of the houses, shops and buildings on the concrete slabs golden coloured rice was laid out drying. We also saw soya and cotton drying, a chopstick factory with wigwams of 1 metre long sticks drying outside. Other houses were festooned with drying tobacco, it is clearly harvest time in the mountains. On some of the mountain roads, crops were laid out in the road and as the vehicles passed over them the crop was threshed. 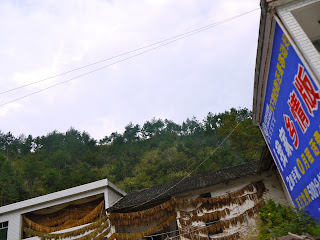 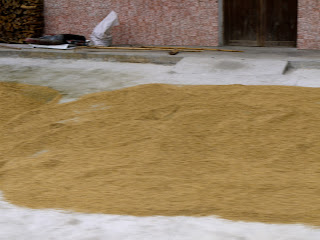 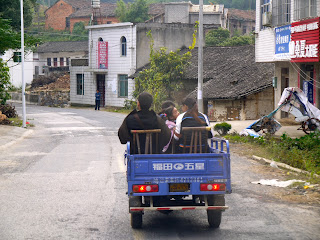 We were off to Tahiu were we were to meet another Brit, Kevin and his Chinese wife (forgotten her name). Kevin and his wife are in business here and in fact were jetting off to Las Vegas the next week to do a trade show, he’s an Engineer, I don’t know what his wife does, import/export I think. We met them at Expo 5000 in Tahiu.  This is still in the process of being built, but it’s an exhibition of 5000 years of Chinese culture and history built, as ever, on a GRAND scale.  It was 120y to get in which I thought was a bit steep even for China, but once inside it was worth it. 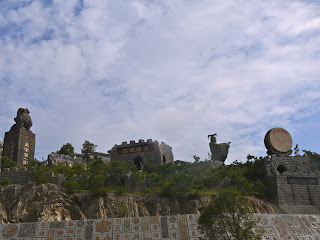 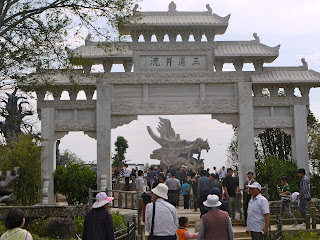 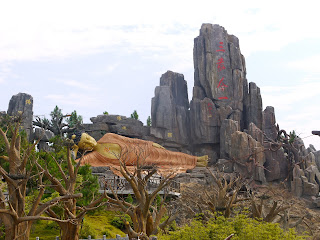 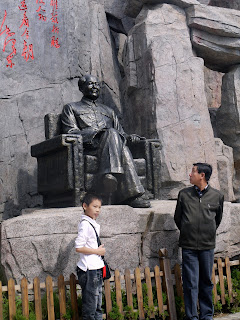 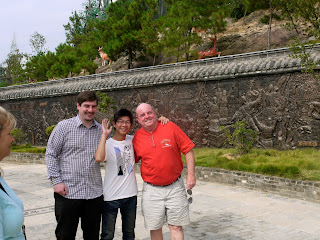 We wandered around getting as much attention as the exhibits, we had to pose for lots of photos, we were followed around for a bit by a TV crew and a number of official photographers took pictures of us.  It’s a bit like being a film star being a foreigner in China, we’ve not been asked for our autographs yet, but I suppose the mobile phone photo is a modern equivalent. 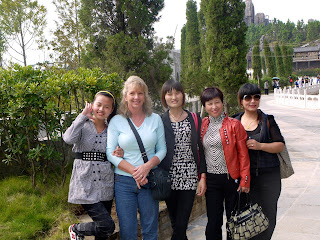 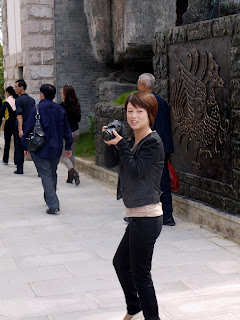 We found an area where there was some live entertainment, chairs were found for us and we were placed centre front so we could get the best view.  It was really hot and there seemed to be a distinct lack of vendors trying to sell you overpriced drinks and as it was well gone beer o’clock we left to find a restaurant for lunch. 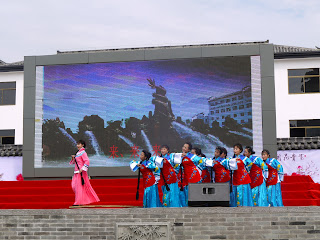 After lunch we bade goodbye to Kevin and his wife, leapt aboard the minibus and set off for our next overnight destination Anqing (pronounced anching).  Anqing is where AJ started teaching in China, and where he met his wife Xia.  Xia had a motorbike accessory shop and AJ was a regular customer, enjoying not only a loud personality (hi AJ!) but a louder motor scooter pimped to the max! So we were staying at another uncle’s hotel and AJ had a date to meet some of his old students the following day.
It’s was another 3 or 4 hour drive to Anqing so we saw the usual sights and dozed (how quick one gets inured to the fantastic sights whizzing past the windscreen).The hotel was not as new as the one in the mountains, but it was OK, clean, ensuite, TV and computer, this was my sight outside of my window. 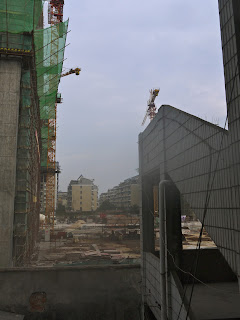 The hotel was also a knocking shop. Down the corridor from me past a receptionist’s desk was a suite of very nice ‘massage parlours’.  AJ told me that he was asked on arrival if any of us would like a massage or a ‘room visit’.  He declined on our behalf.  Although I didn’t see any of the masseuses’ or random girls hanging about smiling in a provocative way, so it must have all been very discreet, although that night my corridor was very busy until about 4am.
We had a bit of a rest and then went out into the evening for a beer and a look around.  Anqing is completely different from Nanjing.  Anqing is a bustling busy place with a lot of street life, hawkers on the sidewalk, food vendors and so on these are not allowed in Nanjing.  We had a beer or two in a nice bar overlooking the main street. 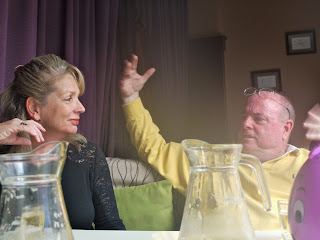 One of the strange things about China is that there are very few places to sit outside and enjoy a drink or a meal.  With the exception of some McDonalds there are no places to sit out and have a coffee or a beer. Yes you can buy a bottle of beer and find somewhere to sit but otherwise you are stuffed. Our local pub, the Blue Marlin does have tables and seats outside, but they are regularly hassled by the police to remove them because they ‘are not beautiful’. I have been there and been moved off my table by the police. Of course once the police have gone the tables are moved back.
Later that evening we went to a restaurant where the menu is a series of pictures stuck to the wall and you chose from the pictures.  There didn’t seem much choice for me so I sloped off and found a street vendor and had chow mien (fried noodles). 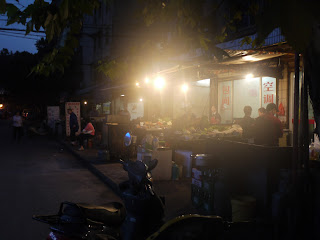 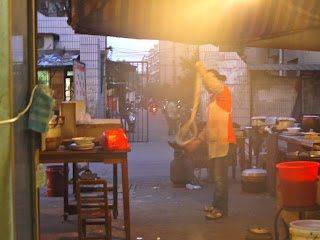 When I got back to the restaurant to join my friends there was a wedding going on. The majority of patrons were the wedding party and the bride and groom were standing outside the restaurant greeting their guests.  This seemed to take quite a long time, then they came upstairs where the groom was taken to the stage and various things were said, then he was joined by his bride, it was all very sweet. 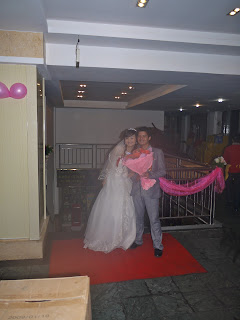 After the meal we went to the Yangtze River where there was a promenade. It was very busy. Groups of people were doing Tai Chi and Ballroom dancing. We went down from the elevated walkway/wall to watch the dancing.  Tom and Peggy started line dancing, I started jigging around and soon we were the centre of attention again. Peggy was whisked off by some woman doing ballroom, I ended dancing pop style with some woman, we all had a great time. 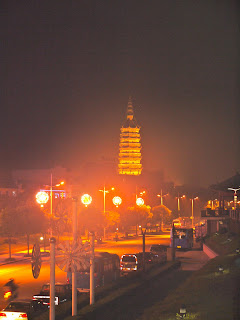 Then over the road Chinese Opera was being performed, it was like Beijing Opera, but was a local form, I forget the name. Once again people were unceremoniously shooed off their seats which were given to us, we were presented with a cup of tea, the performers waved to us and everybody watch us instead of the opera. Hell you can watch opera any day of the night, but four foreigners that’s pure entertainment gold! 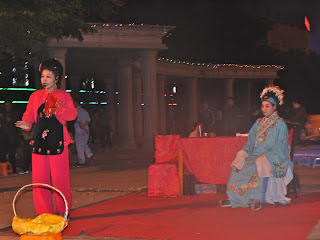 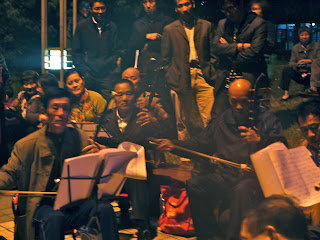 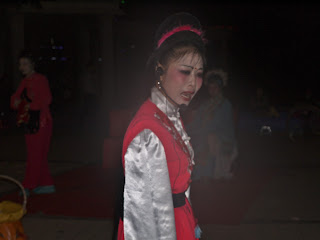 After a while we wandered on watching some classic music being played and other singers and entertainers. As I have mentioned this doesn’t seem to happen in Nanjing which is a shame (although having spoken to some Chinese teacher colleagues at my college stuff like this does happen at a park with a lake in it in town, so I might have to seek this out soon.)
We then wandered back through the busy streets and back to the hotel. As it was quite early Tom, Peggy and I went over to the shop got a bottle of beer each and sat on the sidewalk ‘shootin the breeze’ as they say until it was time for bed.
As I have mentioned it was quite noisy in the corridor during the night (but no knock on my door) and then the building site outside started at about 6am. At about 7 I went out for a stroll plus I needed to find a drink having realised that the majority of my liquid intake over the past few days had been beer.  And by drink I don’t mean more beer I mean orange juice.
We were due to get an early bus home, but as it was a holiday the early busses were full so we were booked on a 3:30 bus home.  The plan was to go to McDonalds for breakfast. But when we got there at 9:30 they had no muffins (the vegetarian choice is an egg and cheese muffin), no sausage meat for the breakfast burgers for the meat eaters so they shut breakfast down in our faces. Tom went off in a huff, not wanting to give McDonalds another cent, I berated the manager telling him I was going to write a letter about his crap management to his bosses in America (he didn’t seem that bothered). Eventually they made me egg and cheese in a burger bun. Peggy got the wrong order and what she got was shit as you can see in the photo. 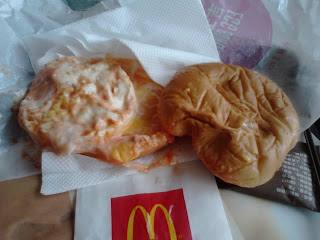 The rest of the morning was spent wandering around shopping, looking at the sights, and so on. 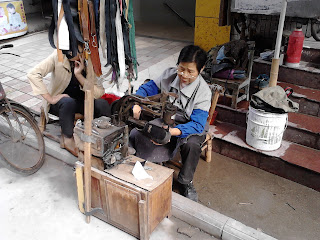 At lunchtime we met with AJ’s old students, most of them had graduated from their college and were now off to university. The girl next to me was off to study medicine to be a doctor.  Her English was quite good so I asked her to help me order a pizza. On the menu all the pizzas had meat on them so I wanted a basic cheese and tomato pizza. She explained this to the waitress and all seemed well.
Until…
A bit later we were talking about tomato sauce or something when she suddenly gasped and with eyes wide explained to me that she had made a mistake and had ordered me a cheese and potato pizza! OMG this was going to be something to look forward to, and yes indeedy it was.  When the pizza turned up it had cubed potato covered with cheese on it. It was absolutely disgusting, I ate two small slices and gave the rest to the poor starving students who ate it.  But hey This is China!
They were all nice friendly students and we had a good time until it was time to dash off to the hotel get the bags and make it to the coach station. The trip was about 3 hours; I slept most of the way.
This was one great holiday – come to china – stay with me – why not?
Posted by Rob Burton at 20:30