My holiday in the mountains – part 1.
Lets start with my biggest fear about this holiday – the toilets, and especially the squat toilet. The good news is that during the whole holiday I didn’t have to use one hole.  Oh but I saw them, yes indeedy.  During the coach stops when one needed a pee one has to use the toilets on offer and the first one set the tone for the whole trip.  They were pretty indescribable, well I could describe them but I’m not really sure you want to read it or I want to write about it. So suffice it to say they were pretty awful. Basically the toilet consisted of a ceramic trench separated into ‘cubicles’ by a ceramic covered wall about 3 feet high, no doors. This worried me no end.
However, some of the other stops did have proper squats with proper cubicles with doors and some were even reasonably clean, so it was a huge relief, in more ways than one, to get to the hotel and find that the toilets were of the European type.  There were similar facilities in the second hotel we stayed at so all was well in that department, so lets move on.
We left our apartments at 7am Monday morning to catch an 8:30 coach to a city called Taihu were we would get a taxi onwards to the mountains.  The coach’s leave from the railway station, which apparently, is the largest station in Asia, and is the worlds second largest railway station, you can read about it here 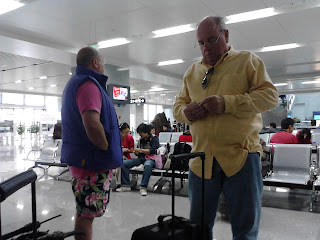 At the coach station
The coach was ok and we set off on time the coach being full. Soon though we stopped and took on more ‘cash’ passengers who were sat on little plastic stools in the aisle – this apparently is the driver’s bonus! It wasn’t long before we had left the city behind, we crossed the Yangtze River and were soon travelling through the countryside. 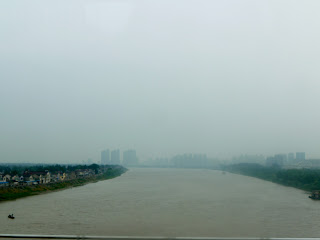 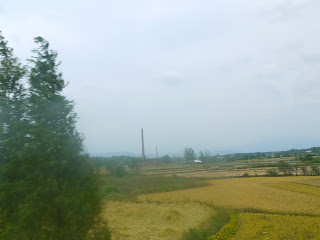 It was a thrill to see the first rice paddies, some with water buffalo or yaks wading about, some with the obligatory bird on their shoulders. Peasants with straw hats were working the fields by hand and the huts and homes were clearly old and in some cases dilapidated by our standards. This was in stark contrast with the areas being used as economic development areas where huge developments were being built. Huge skyscraper flats, and factories covered acres of land both standing empty awaiting tenants, workers and entrepreneurs. There seems to be a ‘build it and they will come’ mentality. 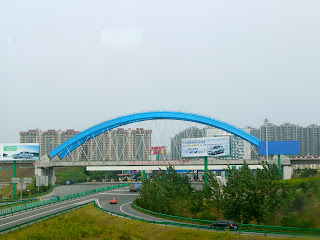 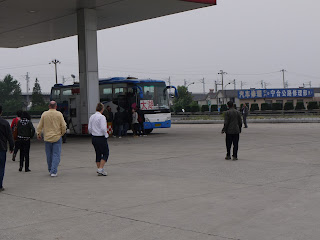 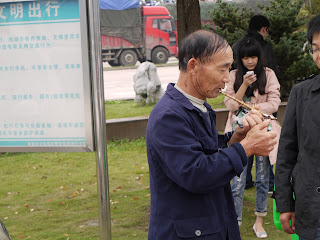 We arrived in Taihu about 2ish I think, the bus had stopped on the outskirts somewhere to let someone off, when suddenly some Chinese guy jumped on the bus and started shouting.  He came up the aisle towards us.  It turned out he was our taxi driver, organised by AJ’s wife. So we had to jump up and hustle our arses off the bus and into the awaiting minibus. 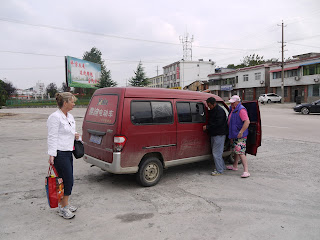 Driver having problem with the door, Peggy not noticing the bald tyres
The minibus was a sort of mini Honda/Suzuki Chinese knock off that had seen some hard miles on the mountain roads.  Tom (the American) wasn’t that sure of it and was hoping for something a bit more ‘American’ I think, but we were soon off speeding through the city streets.  Taihu has this huge expo there, of which more later, so is dominated by a huge Chinese theme park. We visited the park on our return trip so I will write about it later. 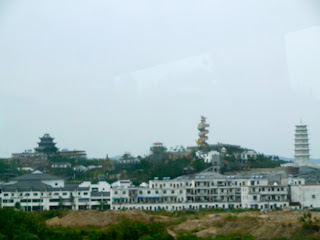 We had been ‘booked’ into a ‘restaurant’ for lunch. When I say restaurant what I mean is an open fronted unit with a few tables and chairs, where we had some food and a much needed beer (or two).  While we ate the driver was off getting more passengers for the 4-hour trip up into the mountains. 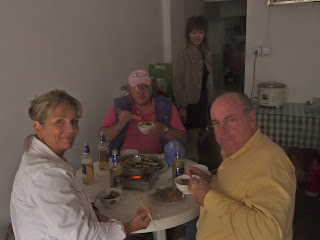 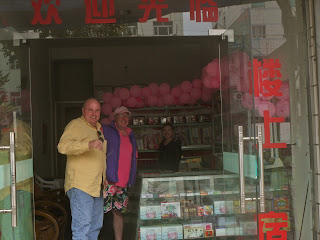 Soon we were off again.  Three of us in the back, three in the middle  (plus a babe in arms) and three in the front, including the driver, two girls shared the front seat. It was a bit of a squash. 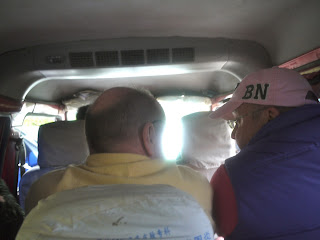 The drive into the mountains was spectacular. A two lane road snakes up and up and up, past paddy fields, precipitous drops, lakes, spectacular views, chickens crossing the roads, rice drying outside buildings, river valleys, tobacco drying on lines, cotton fields, people sitting and watching, peasants working their small fields, vegetables growing on the verges, every inch of land is being used to grow, the hillsides are covered in ancient terraces, climbing the slopes like huge giants staircases. 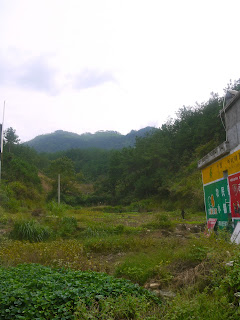 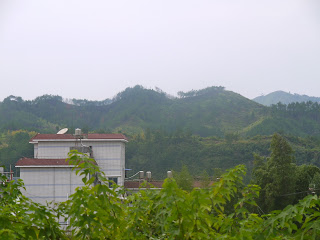 Amongst the ancient farm buildings, new build is going on, everywhere they are building new houses. AJ tells us that you don’t need planning permission in the outback you just find somewhere to build and build. The state owns the land but the people are free to build on it.  On top of that one just builds a house, there are no planning or building regs to comply with.  Many of the houses look pretty nice so money must be being earned somewhere, AJ reckons that to build a house would cost somewhere like 200,000y which is about £20,000.
Anyway soon enough and with aching butts from all that sitting we arrived at Beizhongzen and were welcomed by the family.  Xia is AJ’s wife and her dad is a town leader. Their home is a storefront with rooms above. He sells motorcycles on the side and is a pig farmer. 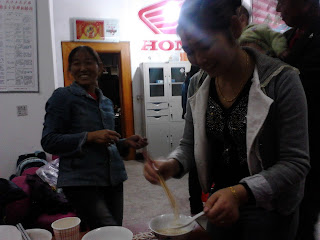 Xai and mother
So there was a big commotion at having 4 foreigners in town and all the kids came running and the neighbours came looking and within minutes we were shaking hands with someone who spoke quite good English, then he introduced his 3 mates that turned up (we had been in the village about 4 minutes), he actually called them his ‘mates’.  That they were in police uniform was a bit suspicious but we shook hands anyway and smiled and said ‘Ni How’ (hello), they said ‘Papers’!  So we showed our passports.  Then they disappeared satisfied.
Drinks were drunk, food was eaten and we were watched by the townspeople like exhibits in a museum.  The children got lollipops, Tom and Peggy were winning hearts and minds and the ‘policeman’ for that is what he was tried to get us all drunk on bijo (sp) the local Chinese vodka type of drink which is not far of pure diesel. Fortunately mine got ‘accidentally’ spilt. I think 20 years ago this guy would have been the town informer for the Party. When I asked AJ who he was, as he was eating with us, he didn’t know, but knew he was a cop. 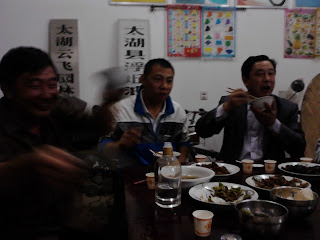 The guy in the middle is the cop, I don't know who the other two were, not part of the family anyway

Anyway the evening was jolly and soon we were off to our hotel which was refreshingly modern, with as noted above a western loo, clean sheets and a great view for me. 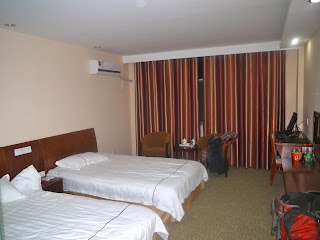 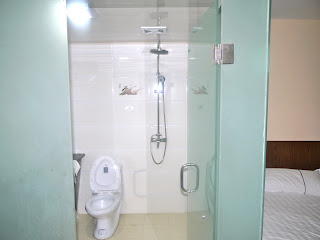 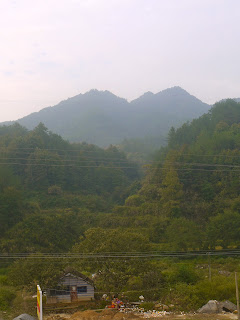 The view from my window
More in the next instalment – it’s late and I have to work tomorrow (Saturday)
Posted by Rob Burton at 06:00