It was a pretty ordinary Friday as they all are. Although I had been busy. In the morning there had been a ceremony welcoming the new students to the British Colombia Institute of Technology programme at my college. The international director from Canada was visiting and there was speeches and pin presenting and a trip around the campus. Then we went for lunch, and a very good lunch it was too at a very good restaurant, and I had the best vegetarian food I'd had so far in China. 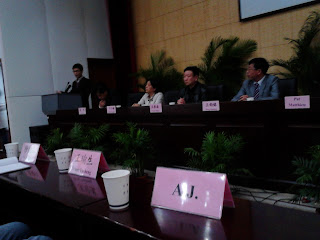 Then after that was done and dusted I went out and got a haircut, moseyed around the shops and turned up at the Blue Marlin around four to enjoy the end of my working week with some of my teacher colleagues.

I was feeling a bit rough because I'd picked up another cold, but not so bad that I turned down the suggestion of some friends that I might go into Nanjing with them that evening. We were also arranging a Halloween party in the city for Saturday night too.

I had had a couple of beers, but by 8:30 when I had left I had had three beers maximum since before 4.

Steve jumped on the back of my bike and we set off for home.

I was crossing a junction when all of a sudden a van was upon us. It hit us midships. 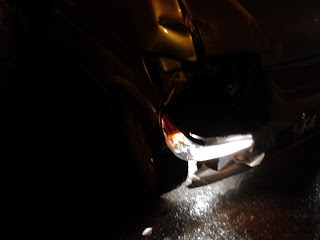 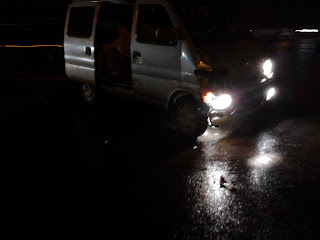 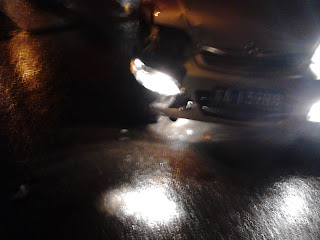 I can remember Steve calling my name and that I was lying on the cold wet floor.

I got up and went over to him, I didn't seem to be badly hurt, I had a big bump on my head and my foot hurt. Steve was obviously in more trouble, his leg was obviously broken and his teeth were broken too.

Loads of people seemed to suddenly turn up. Expats and Chinese.   The ambulance came, then the colleges international liaison, Richard and the police.

Everyones attention was on Steve. I guess I was going into shock. I can remember sitting down and shivering a lot. I gave my name to the cops.  Then two Australian women told me to get lost. So I jumped on my bike (which was up on its stand?) and came home.

Tom and Peggy turned up at my place and checked me out. got me to bed covered in quilts. Todd rang checking on the symptoms of concussion.

Later at about 1am Richard and the Cops turned up, asked me some questions, breathalysed me (I was sober) confiscated my bike as evidence and left. I slept.

Saturday, Tom Peggy and I went to the hospital to see Steve. He was in a bed in a corridor. Not a happy bunny about that at all, but fatalistic and optimistic about the accident.  I admit I cried a lot at seeing him and felt really guilty, but as he said, it was just an accident.

He told me that he had been really worried about me. I had been knocked unconscious and was lying under my bike - thats why I couldn't remember putting my bike on its stand someone had picked it off me but  left me lying there. Steve said he thought I might be dead.

Gulou Hospital Nanjing is not the most modern hospital in China, and the corridor is a pretty ropey place to be. As soon as you enter there are women jockeying to be your 24hr 'mum', they cost 100y (£10) a day and look after your every whim, getting your food, keeping you comfortable, helping you wee and so on.

We stayed most of the day with Steve. He told us that they had hammered the pin through his ankle with no anaesthetic and that as it was the weekend there were no doctors or dentists available to see him. He was a bit pissed off at that.

Richard the international liaison was there and soon the vice president of the college turned up, which we thought was a good sign. We had all agreed that we (the international teachers) would cover all of Steves classes otherwise the might have just shipped him off home, The liaison was a bit surprised at this and couldn't seem to understand that we would all do this for free to protect Steves job.

Tom was there, and Tom is a force of nature and he told the vice president what we were doing and things seemed to get through to them.

Steve was in good spirits and all the foreign teachers turned up to see him, get him stuff and so on.

While I was there I took the opportunity to get checked out by the doctor, I got a CT scan of my head and an Xray of my foot. It cost me about £40. 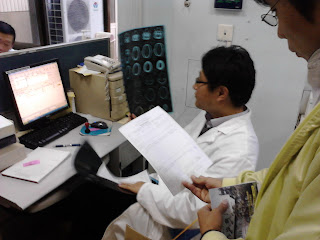 Doctor and Richard checking my brain 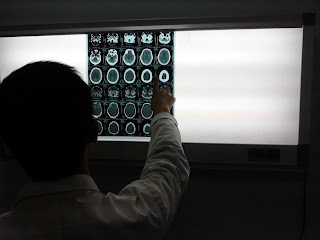 'Hmmm clearly a large brain and a huge intellect, well developed sense of humour too!'
Luckily all seemed OK. Now Im just worried about turning into a big green thing because of all the Chinese radiation. 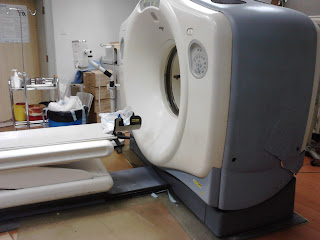 SUNDAY - I got there asap and found Steve in a worse mood, he had had not much sleep in a busy corridor and was getting pissed off at being the centre of everyones attention. People actual got up and came over to watch him have a piss and so on. Everything here is public. Plus there were cockroaches crawling around his bed. 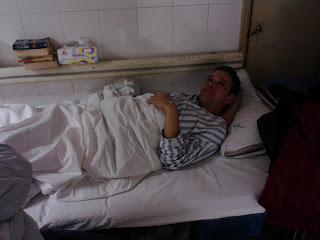 Not much happened. All the Chinese teachers from Steves office turned up with a big basket of fruit which was touching and other expats visited.

I got the name of a western doctor from another American expat I know and gave it to Steve who was going to ring it in the morning.

Tom and Peggy visited Steve and found him in a bd way. He had had a bad night in a busy corridor with cockroaches crawling on him. He didn't really know what was going on and the schol liasion guy was talking about him losing his foot.

As I said Tom is a force of Nature and they called the Western Doctor I had got the number of.  The Tom jumped in a taxi and took Steves xrays to him across the City. The Doc confirmed it was a bad break and got his coat and his nurse and jumped in the taxi with Tom and visited Steve. Ho noted that Steve's foot was getting infected and he needed it to be straightened and set asap. I think Tom faced up the school liaison and all of a sudden Steve was moved into a smaller room with only 1 other person. Plus 5 doctors turned up looking at his foot.

Decisions were made, the western doc left asking NO fee!

Steve had an operation at 5pm last night.

I hear on the grapevine that the op was a success and the latest I heard 30 minutes ago is that Steve might be out of hospital today.


My bikes still with the Police as 'evidence' we have to wait for the police to apportion blame. If it goes against me, which Im told it might simply because Im a foreigner and 'rich' then I will have to pay compensation to the driver! Sucks huh?


PARENTAL WARNING - next is a picture of the bruise on my arse! 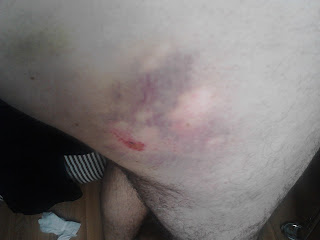 Will keep the arse updates coming as it changes colour......
Posted by Rob Burton at 20:23