Trains and Planes and Automobiles

Its official, Im on the scrapheap!

Had confirmation today that my voluntary redundancy from the university is confirmed - woohoo. 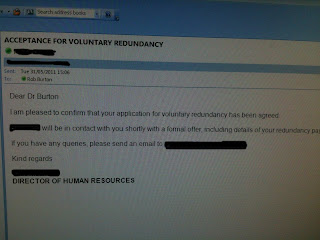 I was getting a bit worried to be honest as time is moving on and the agency in China had started to talk about gettinig visa's and airplane tickets and seminars in Bejing and I hadn't heard from the university.

But now its real.

So its just been three months since I made my decision - the time has flown and in another three months I will be leaving for China.

The agency have given me the email addressess of the teachers I will be working with. Anna who has been at the school for a while and will act as my mentor and Sherree who will be a new teacher there with me. So its all exciting and theres lots to think about.