When the worm turns... things get ugly in China.

Teaching in China is a pretty good gig. I should know as I have been doing it for five years now. I know my postings haven't exactly been regular but along the way I hope I have given you all some insights into what life is like here in the Glorious Peoples Republic.

Life, for me at least, is pretty good.  The job is good and I enjoy teaching in a High School although it does have its frustrations. The students are a real mix some want to learn English, other like Albert, cannot be arsed and prefer to while away their days sleeping or disrupting the class.  In Alberts case its not that he's stupid, he is not. It's just cos he is rich. He doesn't need to learn English because there will be a nice cozy niche in the family company when he has finished his penance here. I use the word penance advisedly because I am told his mum just doesn't want him at home. This is underlined by the fact that his mum did hire a home tutor, but the home tutor gave up the ghost cos she couldn't handle him. I just shout at him. He scored 20% in the oral exam I just gave all my students for the end of semester which sort of underlines my frustrations.

Frustrations of another sort is the management style of my agency bosses. Over the last two or three weeks they have resorted to a bullying style of management with me. And its a style that I just do not respond well too.

The first I knew of it was when an new guy to the team who has a sort of management role knocked on my front door.  He came in and sat down and explained to me that the main boss, a female, wanted me to teach TOEFL (an american qualification) to a student from the High School (not our Foreign Language Department) in the evenings after school. I was asked to quote a price for my time - which I was happy to do. I asked around and found out that this sort of tutoring paid between 200 and 300 rmb. So I quoted the 300 figure as you do.  I was told that the they would pay 250 rmb which I was happy with.

Then the next thing is I'm having my contract quoted at me and that the most they will pay is 150 rmb. Plus I started to hear all sorts of rumours about how people were unhappy with my teaching. That I was swearing at students and how I was 'uncooperative.'

This started to make me angry because I am the most co-operative foreign teacher on this campus. I have done everything from speaking to parents, writing letters of recommendation to foreign universities, I even used my credit card to pay one students £2000 deposit at Royal Holloway London. These rich parents don't have credit card, I was repaid by international bank transfer.

I had also been told not to tell the school about this work as it was 'a secret.' Apparently the boy was the son of a friend of the principle who was pulling strings to get the student extra tuition prior to him going to the States.

So it went on. I didn't keep it secret of course, I went straight to my school manager, who is different from my agency manager, and asked him about these rumours. Of course he didn't know anything about them cos they were all bullshit.

In fact he started to tell me that just the day before he had asked my agency manager to pay me a bonus for all the good work I had been doing this month.

Now this is where it all goes tits up - pay attention.

I heard the words 1000rmb - now his English isn't great, but its good enough. So I walked away from that meeting thinking I was inline for a 1000 rmb bonus.

But I was still seething that I had been bullied into accepting this TOEFL work. Not only that they tried to move the goalposts. First it was why not 3 lessons a week and not 2. I said No. Then it was we need you to start right away. I said 'No the arrangement was for after the spring break holiday'. At first they also wanted me to teach him in my apartment. Of course I said no, I need a classroom. Plus I do not have any books or materials. They said buy some (they would refund) I said No.

I was not feeling at all cooperative after all of this. And feeling pretty pissed off that all my efforts over the last four years at this school seemed to have no value at all.

Then the interlude of the annual agency party.

I had been asked to give a 'performance' as is the tradition. I said no. and I wasn't very cooperative for the group photo. I kept my head down. We foreigners are always pushed to the front to stand next to the big boss.

Yes I was sulking.

Then pay day comes and I look at my salary - and no bonus.

So I call my HR woman and say where's my 1000rmb bonus. She says they had not been informed of that by the school.

So I went and spoke to the school boss who had mentioned the original 1000 figure and he clarified it. I had misunderstood him. He said their is a 1000rmb pot and he asked the other manager to give me a consideration this month. OK so thats cleared that up.

Usually the bonus for good work is 500rmb so thats fine. 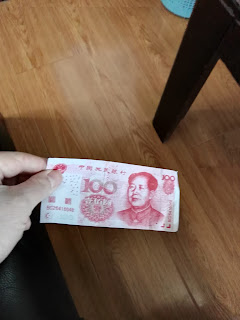 This is funeral Money this is NOT real RMB - Policemen please take note.


10 measly quid for all the work I've put in, all the letters of recommendation I've written for useless students.

This was the straw that broke the camels back.

I went to see my academic boss and complained about it with her. I was steaming. I had a 100rmb note in my pocket - so I took it out and said here give back to my employer I don't want it. Its a fucking insult.  I don't want their stinking money.

I said that they were treating me no better than a street cleaner. Oh you must do this, then you do that then do this and here's 10 quid for your extra trouble.

Now I was really streamed up.

We were at the annual staff meeting on the last day of the semester - just yesterday actually.

I went and sat down with my colleagues. Muttering about what a bunch of bastards my agency was.

So then I was pulled out of the meeting and asked to go and speak with the school boos, the agency boss, the woman from HR and the academic boss - all chinese BTW.

I told them that offering me 100rmb was an insult. I was told no it wasn't and had my contract quoted at me again.

I still had the 100rmb note. So I took it and ripped it up and threw it across the table at them. Told them I didn't need their bonus and in fact if people actually spoke to me nicely that might just get me to do all of that extra work for nothing.   Then I left and went back to the meeting. 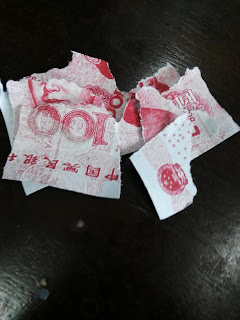 This is not real RMB this is funeral money - policemen please take note.

At that meeting I gave a presentation and received feedback from my students. (a questionnaire had been used by the academic boss) I got 100% satisfaction scores and on the weekend I had received my fourth in a row Excellent teacher award from my agency.

So after the meeting there was another meeting with the same faces as above. We agreed that there was a misunderstanding about the 1000rmb bonus. But they could not understand why I felt the 100rmb was an insult. Given all I do for the school. They were also pretty upset I'd torn the 100rmb note up as apparently thats illegal win China and is disrespectful. So they were more upset that I'd torn the note than how I was feeling about their actions towards me.

Anywho the upshot of the whole thing was the main problem lay in the fact that they had changed the bonus system from one where a good report got your 500rmb - which I had received a few over the years - to one where you got 10rmb (£1) for each point you were awarded. You could only get a maximum of 120points thus 120 rmb bonus. This new system was put in place in March and the agency boss had not bothered to tell us - or me anyway - which he apologised for.

The upshot is they said they would contact head office and increase my bonus to 200rmb! (£20). Thus missing the whole point of my ire which is the money is not important all I want is a bit of respect for the things I do.

Is that too much to ask in a country where 'face' seems to be an important concept?

Rant over - sorry if I bored you.