Teaching ESL in China - Advice from the "Handsomest Teacher in Dongwai" - Official.

Teaching ESL in China. Lesson 2. Thankful for Thanksgiving No. 2. The competition. (Is the real title of this blog) 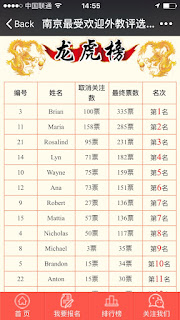 Todays Blog is coming to you from 'The most handsome teacher in Dongwai' and one of the most popular teachers in Nanjing.  In my defence, this is because I was part of an online poll of teachers carried out by a newspaper in Nanjing and I eventually came in at joint seventh (see pic above) in a poll of 16 other teachers and that I became the 'most handsome teacher in Dongwai' (the short name of my school BTW) is simply because there were no other contestants - so I am 'handsome' by default.


Lighting Incense in Thanks at the local Buddhist Temple 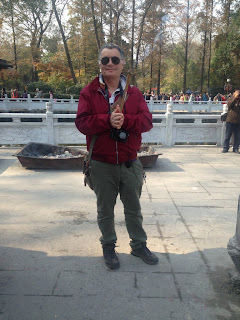 Nevertheless this has been told to me number of times by staff and students around the school and they seem inordinately proud of my success. One of the many reasons to be cheerful in China. Little things matter.

This week has been Thanksgiving Week and although not being an American I still have a role in educating my students about the ways of the West as some of them will be enjoying good old American hospitality in the near future.   So this week my Grade 10 students have been immersing themselves, as much as they possibly can in the 3 x 45 minute lessons I have with them, in what the message of Thanksgiving is.

So I talked to them a bit about the general idea of Thanksgiving and showed them this little cartoon which sort of skims the surface of the genesis of the holiday.


We had a listening gap fill exercise which re-enforced vocabulary

Then generate vocabulary around the dinner and the holiday and talk about giving thanks for things.

Then I made them read a poem aloud about giving thanks.

Thanks for the fire,
That keeps me warm.
Thanks for my family,
Keep them from harm.

Thanks for all life.
And last, but not least,
Thanks for the turkey


We’ll have at our feast.

Homework was - Write  200 words about what you are thankful for in your life.

During the second lesson they get to read what they have written. I choose them as I have mentioned by a random number generator.

It is interesting to note the differences between these Chinese teens and kids back home. These Chinese kids write from the heart with no sense of embarrassment and shame. They write heartfelt thanks to their parents for their life, for the love they receive and for the ongoing support by their mother and fathers who they recognise work hard to get them into this expensive school. I am not so sure Western Kids would so openly write about their emotions and feelings and then read them out aloud to the whole class. I would be interested to hear what a western teacher says about this.

So thats the second class seen too.

For the third class I wanted a bit of a sense of occasion so I found an online Thanksgiving crossword and created a Thanksgiving word search using some of the crossword answers to give them a hand because we hadn't covered all the vocabulary. 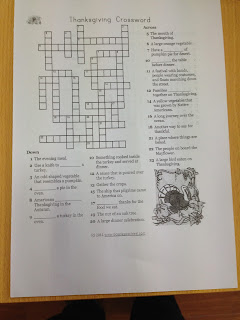 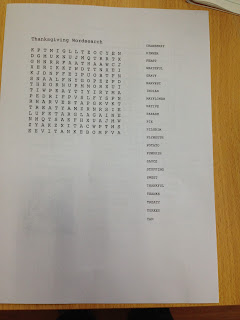 Now Chinese students love competition and so its always great to tap into that competitive spirit and offer some prizes for the best work. And boy don't they go for it.

My prize was a box of Dove chocolate for 1st prize (chosen so if it gets shared around the class by the winner everyone should get a piece) and two smaller tubes of M&M's for second and third prize. 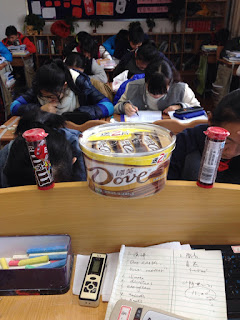 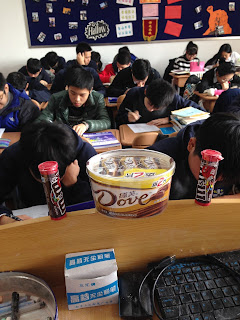 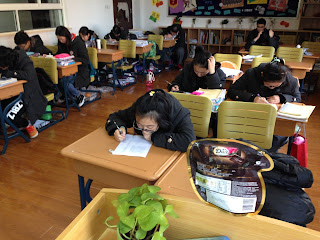 But if you want to keep your students busy, keep them engaged, and have some fun and a quiet class any sort of competition in the classroom gets these kids going.