A snapshot of teaching ESL English in a Chinese High School 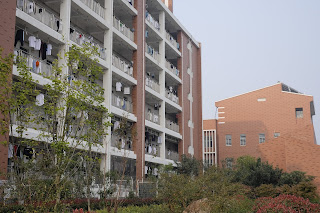 A different view of the school - the boys dormitories - hanging washing.

This semester sees my third year at this school. On the whole its okay - that's why I stay here.  The school is in Jiangning which is an 'outskirt' of Nanjing - but it won't be for long because these super Chinese cities are expanding as quickly as the Chinese economy is. Even in my short two years and counting the neighbourhood has changed with large office buildings and accommodation blocks rising into the skies. 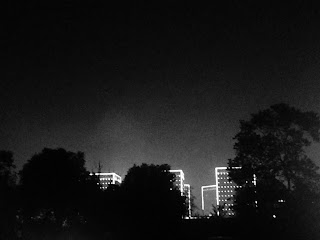 The new buildings lit up opposite my apartment

But at the moment it's quiet, the air is cleaner than downtown. My apartment is nice and the campus is safe so Snook Doggy Dog can have it all to herself. 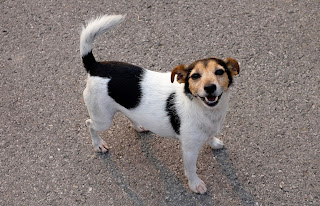 So what about the teaching. Maybe you are starting to think about coming to China, have an adventure and come English teaching. Why not - do it, is what I say, what can you lose? 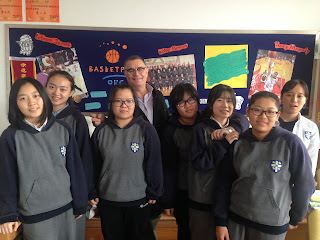 Top pic - some of my senior students - my third year of teaching them and below two Junior students who I have know for the same time but only taught them during my first year - but we still like each other!! 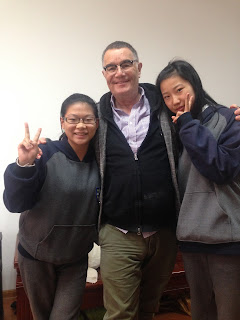 I have written elsewhere about what you need to come to China to teach but I'll briefly re-itterate it here. A degree is needed. Any degree it doesn't matter really. A TEFL course of at least 120 hours. Groupon do one for £49 - click here is also required. Or a CELTA if you want a better job and more money. And most bona fide places want two years teaching experience - but you can write your CV to match that if you have been involved in any form of training, teaching or whatever. My advice is don't come for a teaching job if they will not provide you with a Z visa - those jobs are illegal. Do not come for a teaching job, at their request on a tourist visa on the promise that they will convert it later - they will  not and you will be illegal.  Also I have heard on the expat grapevine that the Chinese government is now requiring foreigners coming here for teaching jobs to provide 'proper' criminal record checks - to weed out sex offenders and paedophiles wanting access to school kids. When I came my 'background check' was basically me writing and signing a letter stating I wasn't a criminal. (I'm not by the way). 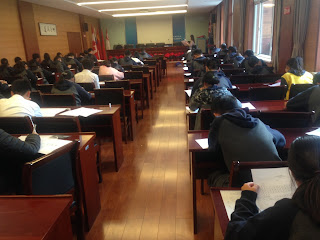 This year I am teaching 'Oral English'.

Grade 10.
This is more difficult than it sounds.  In Grade 10 I have 61 students split between A & B (30 + 31).  I only see these classes for 3 x 45 minute classes a week. So you can imagine how difficult it is to get around every student to get them to speak, let alone teach content which will impact upon their ability to speak.

In  terms of classroom teaching aids I have a book. World Link - Developing English Fluency. You can see more about the books on the website here. But my main problem is lack of time given the number of students in each class.

Other problems stem from both the book and the classroom set up. The book comes with a CD for the listening and other stuff I haven't even had time to look at or use. Problem 1. Is that the computer in the classroom does not have a CD/DVD slot.  I tried to download the CD to my computer (Apple Macbook) so I could put it on a USB stick - but despite the instructions on the CD telling me this was possible I couldn't do it - and Im no slouch with computers.  So the solution was to buy my own portable CD/DVD drive/player. Often to no avail because just today - after writing this I went into my classroom to teach and the computer wasn't working - so all my lesson planning was down the drain and I had to teach 'on the fly' - again.

Problem 2 is if I use the book - how can I teach Oral English? As the book is meant to support the full range of English learning. And how to do it in such a short time? My solution is to work with the book on the first lesson, simply to raise a topic and to generate new vocabulary.  At the end of that lesson the students get homework - basically something which relates to the work and new vocabulary - they have to write a 250/300 'essay'.  On the second class - they have to speak what they have written ( It will have been handed in and marked by me by the time of the second class). But how to get 30 students to speak in 45 minutes.  Well, its simple you can't.  So I use a random number generator and pick the kids to speak that way. Classroom discipline has to be strong because a lot of the kids think if they are not speaking then its ok for them to stop listening, chat with neighbours, sleep and so on. I want my students to listen to and respect their schoolmate who is maybe struggling to speak - maybe they can learn something this way.

Problem 3. Is the school expects me to 'test' each class once a week. So I have three lessons, one of which has to be a test! Its frustrating because I am not sure that things get any better.  However, I do have some good speakers in my class and some bad ones I admit.  But having a test lesson each week is defeating the object - so this often slips - like today - where I will develop new vocabulary on the topic we started last week - get them to write about it next week - do the speaking and this time (Thursday) next week do the test. 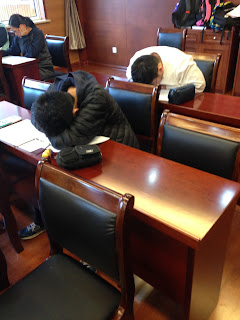 The reality of the mid-semester exams 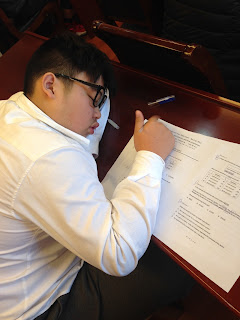 Grade 12 (A&B) is my biggest worry. This is their final year and they all expect to enter foreign universities. In their first year with me, with the confidence of youth, they all told me they wanted to go to (or their parents wanted them to go to) Harvard, Yale, Oxford or Cambridge. The sky was the limit for these pampered kids from rich backgrounds.  Now barely 20 odd weeks from leaving school I think some of these ambitions have been reined back. I'm not sure if some of them will even pass their IELTS or TOEFL English tests at the right levels to be accepted into higher education - let alone the Ivy League universities.

I technically have around 24 students in each class.  But since at least the spring/summer semester many of them have been missing from the classroom. When I ask why I'm told they are out with tutors - this is because they are and have been sitting the Cambridge A Level exams. Indeed one of the tutors used to be the Physics teacher here, but no he's set himself up as a tutor and making big money over 500,000 rmb (£50,000 approx) last semester I've been told.  So this last semester and a half I have been seeing between 6 and 12 students from Class A and around a more regular 12 students from Class B.

The changing numbers also brings with it its own challenges. Its difficult to teach classes with items that I want to run over a number of classes because I never know who is going to turn up or be missing. If I organise groups or pairs to prepare work - then the next class half the group or one of the pair is missing or students turn up unprepared for what I want to do it just causes chaos.  If I plough ahead, the students with nothing to do will chat, or sleep or disrupt the class. Note once again these students are expecting to go to a foreign university at the end of this year and still they fail to pay attention.

Todays update, I had a class at 13:30 - first class of the afternoon. I turn up - there are 5 students - three of whom have barely been in my class these last two semesters - the rest were in an A level exam - I wasn't told of course.  I had planned the 'weekly' test as I haven't done a test with this group for a while.  Then 2 of the 5 decided they needed to be elsewhere leaving three.  So I stood around like a lemon for 45 minutes - attempting to get them to converse with me. All of the final three are expecting to go to an American university at the moment their TOEFL level is around the 80/84 mark - which is pretty good as the overall TOEFL average for entering a US university is around 80 but the prestigious Universities like Yale want 100 plus and they specify scores for reading, writing and speaking and so on. 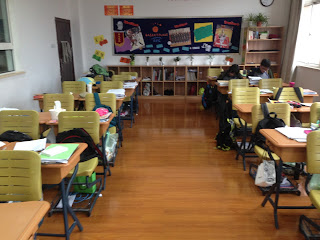 I am using Book 3 of  World Link - Developing English Fluency and to be brutally honest it is useless for these students. Despite being university candidates and being at the school - a "Foreign Language School" for over nearly three years their English is abysmal. I've given up blaming myself because I know they have paid little attention to their lessons either in school or outside of the school - where, in my opinion,  they should be using and learning their English as much as possible. Even some of the  basic words, concepts and ideas are beyond them in these books.  I have tried to give them the benefit of my 20 years experience teaching and working in excellent universities in the UK (Exeter and Plymouth) but it seems to no avail.

This might seem strange as I have indicated above that these self same students are achieving TOEFL and IELTS scores which would see them gain entry to Universities worldwide. But does this mean they are good at English? Well the answer to that question, in my opinion has to be a resounding no.

They achieve these IELTS and TOEFL scores through the use of well worn tricks of the trade that are passed on through the years. The learning is all done through repetition, memory and rote learning. There is no real attempt by these students to try to speak like a native speaker which the IELTS test is premised upon. The learn to speak to pass the test at the required level, notably a 6 or a 6.5.  That the UK and other universities have cottoned onto this is no surprise. Even when I was working at Exeter Chinese students would turn up with their IELTS certificates and be barely literate in English. That over 8000 students were sent home from the US last year for plagiarism and not being up to scratch is no surprise - I wonder what the worldwide number would be?

Also this will turn into a nice little earner for the Universities who are now providing English Language Schools - at a price for their international students who turn up not being able to cut the mustard. For example a 13 week course at a London University costs around £4.500 whereas a 42 week course at a university in the South West of England costs about £9000. All extra money that these students hard pressed parents will have to find on top of International Fees and living costs.


Some idea of the cost of extra English lessons in England 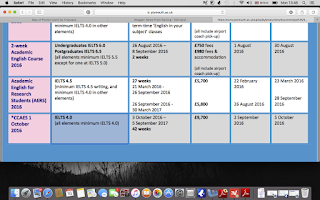 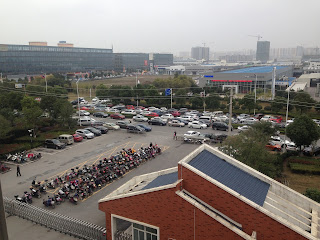 And for those parents or students that get out of hand, the school guards have the right equiptment 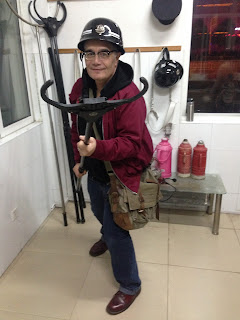