Confused, bemused, mistaken, shaken but not stirred - the first week of the Chinese High School Semester

Like many other TEFL/ESL teachers across the world thats the first week of teaching done (although some of my colleagues here in Nanjing started at the beginning of August so don't assume you will have the summer off if you are coming to China, check your contract carefully).

The first week of teaching here in my school is often very confusing, although for those of us who have been here for a few years we all have become a bit desensitised to the chaotic and abstract nature of teaching in China.  What I mean is we actually started work on the 1st of September, a Tuesday.  We also worked Wednesday, but then we had a Chinese public holiday to commemorate the 70th anniversary of the end of WW2. So Thursday, Friday and Saturday were designated as holidays (despite the fact that Saturday is a day off anyway) but as with most Chinese holidays we had to work Sunday to pay one of the days off back. Sunday is then designated as a Friday, but we were not told that until about 9pm Saturday night - keeping up? 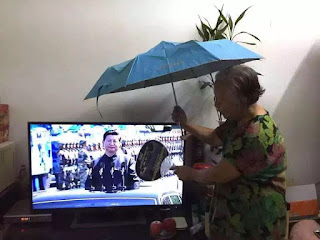 Grandma protecting xi jinxing from the sun whilst on parade.


We were actually given our teaching schedules a week or two ago but in the meantime things have changed so I'm now on version three. Its remained stable over the last week so Im sort of confident that its now fixed, but Im not holding my breath. (update- in the last two days two of my classes have been rescheduled because of the 'public classes' - see below) I have 14 classes over the week, my old Grade 12 Senior 3 who I have taught for the last two years and the new Grade 10 Senior 1.

We have been moved into new offices and classrooms so we have had to put up with the moving of all out stuff and sharing the room with new Chinese teacher colleagues. One never knows, in these cases, who is the stool pigeon. Who is reporting back to the admin staff if we are not at our desks for the regulation 2 hours a day office hours. Everyone is very sweet and friendly, don't get me wrong, but this is a society based upon the old communist ways where denouncing enemies of the revolution was commonplace, so its not too great a step to denouncing the lowaei (foreigner) for not being at the desk for the regulation number of hours. (Check your contract for your office hours - maybe Im a bit too paranoid!)

So not only do we have new office arraignments we have the new classrooms to get used to. In my old classroom the teacher had a big metal desk into which the computer was bolted with the screen easily visible through a glass window in the top of the desk. In the new class rooms we have a lectern and the computer is bolted into the wall and is locked behind metal doors. 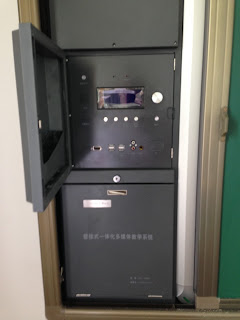 Can you see whats missing? During my first year of teaching here I was teaching using the the Cambridge iGCSE at the back of the book they have a CD containing all the listening exercises and so on. Of course none of the computers had a cd/dvd slot. So I wrote a letter saying that and asking for CD/DVD slots in the computers. We got them for the start of the next years teaching.

So now we have new computers - with no CD/DVD slots and new work books, different course with CD's/DVD's to complement the course. Of course I cannot open them on my Macbook to put the mp3's onto a usb stick, despite the readme file telling me I can.  I've had to buy an external CD/DVD drive. The keyboard and mouse are wifi and we see the desktop via the projector on the white screen.

Also, there is no separate screen that only the teacher can see as before, which meant for certain things you could arrange whats on the screen before the class got to see it. So maybe on a PPT you want to start a slideshow, without the class seeing whats coming up. So now I have to stand the class up, turn them around, sort the screen out then get them to sit down again.  Stupid waste of time.

Further meaningless bureaucracy turned up at the end of the week when some bright spark decided that each teacher should observe other teachers in the classroom at least twice a week( this is now 5 times a month). This comes along with the form stating who will be observing who and when, to be filled in asap. Plus an observation feedback form where they expect us to dob in each other re the quality of our teaching.


(any other problems or issues)

This might have been the straw that broke the camels back because even the Chinese teachers are joining our little chorus of dissent.  Obviously we are going to refuse to this. It doesn't make sense for us all to be observing each other and reporting back. That's just a recipe for bad feeling between colleagues.

In principle I have no problem with people sitting in my lessons and observing, thats just good practice. What I don't expect is for teachers with less experience than me or without the proper training to write reports about my standard of teaching, classroom atmosphere and so on. If that is to happen then I expect to be observed by a trained, experience teacher and I will have discussed the situation prior to the event and will have some ideas of the guidelines they are looking for.  So unless this happens the above ain't gonna happen in my classroom.

On top of this on Friday I was told that sometime in the future all the teachers will be coming to one of my lessons to observe it was to be a 'public' lesson. I was asked then and there to pick a class to which they could attend. My response was, as always, teachers are always welcome in my class, so its the teachers who should pick the class they want to attend because I don't know what the other teachers schedules are, so as a group its easier for them to pick. This seemed like a new and revolutionary idea to the guy who was doing the asking/telling.

Then today (Monday), just before lunch I was told that my 14:35 class was cancelled because of the 'public' lesson and that my class was moved to the 15:35 slot. I hasten to add the 'public' lesson is not mine so maybe my deflection tactics worked - we will see. Don't hold your breath. Things change rapidly in China one cannot be inflexible in a Chinese school.

Live update: Tuesday. I reluctantly went to the Chinese teachers public lesson. There were 29 students plus 10, yes 10 people observing, all with little note books jotting stuff down - this included admin staff who have no teacher training at all. That 70% of the English lesson was taught in Chinese so I didn't understand much is by the by (and of course if anyone ever asked my opinion I would question why in an 'English Department' of a Foreign Language School are English lessons taught in  Chinese?  How the hell can these students switch their brains into English mode if they always have the comfort of listening to the teacher and responding in Chinese?)

We had made it clear that we were unhappy with this situation so we have had a brief meeting with the Chinese admin and talked to them about proper professional development and our disquiet about having to write reports to be handed into the bosses and indeed having reports written on us. As a compromise we are designing a pro-forma to be used in our classes with a bunch of tick boxes, further we will also try to make sure only western teachers observe the other western teachers.

So maybe crisis averted. But as one of my Chinese colleagues stated its really all about the bosses making sure the teachers have more than enough to do during their 10 hour days in the office. They forget we are on different contracts.

Of course new students always bring new challenges. For many students in Grade 10, my Year 1 seniors I might be the first foreign teacher they have had. So obviously they think that whats commonplace in a Chinese classroom is de rigeur for my classroom.  Don't be mislead by British TV programmes that talk about the discipline of the Chinese classroom.  I watched 'Are our Kids tough enough for Chinese School' on the BBC recently and I have to say I am stricter in my Chinese classroom than these Chinese teachers were in the British classroom.

Its a school rule that mobile phones are not allowed on campus let alone in class, but some students do have devices such as iPads/tablets which they use as translators/dictionaries. Most of the kids though do have electronic translators (but be careful these still can have games on them). But mainly its getting the students to understand that if I'm talking they are not talking. No sleeping - Chinese students do seem to like to have pillows or cushions in class which they sit there cuddling and often dozing off (mainly the boys, I might add). In my class they are banned, in fact I want them banned across the department. Because how can I police this when the Chinese teachers don't bother?  Last week I stopped one student from using one of those comfy neck cushions we might use on an airplane. The next day he had a bed pillow! 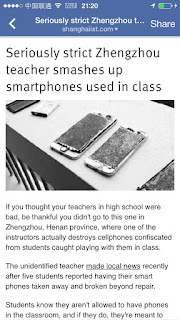 We are not so cruel here.

Grade 12 are paying attention now in the classroom, mainly because they all had their A level results and surprise surprise none of them will be going to Oxford, Cambridge, Yale or Harvard as they have been bragging about for the past two years. In fact most of them wouldn't get an offer from the poorest college/university based on their results which were mainly D's E's and ungraded. To be fair a few did get A's for maths but for those subjects that need a better standard of English, the sciences, economics and so on they were just not up to it (a handful have scraped B's and C's).

They now have just 40 weeks before they will leave this school.  So they have to sit the A levels again, and pass IELTS or TOEFL at the required levels and for some this will be a mountain to climb. And I have to be their good sherpa leading them onwards and upwards. I hope I can make a difference.