Back in Blighty - rattly, decrepit, dirty and slow - there and back again - a blog in two parts.

Being in the UK is hard time for me. I have lost the taste of living in my hometown. In China the notion of the hometown is revered. Pilgrimages are made religiously every year during the Spring Break for the Chinese New Year and during the various holidays throughout the year. Indeed Chinese New Year sees the largest human migration in history as thousands if not millions of Chinese travel back to their hometown from all four corners of the world.

I live in Plymouth which is a beautiful place to live I'll admit. The view from historic Plymouth Hoe is world class and stunning but there is something missing. When one goes downtown its striking to see how shoddy everything is. From the closed and abandoned shops to the tired architecture. The whole infrastructure is suffering from years of neglect and lack of investment and dare I say vision.

The whole problem is summed up in just taking a train journey in the UK. Taking a rattly, decrepit, dirty and slow First Great Western train from Paddington to Plymouth and again from Plymouth to Weston Super Mare to see the parents/grandparents sums up what its like to live in the UK in the 21st Century. 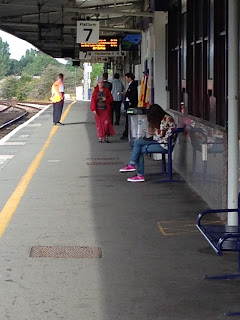 Waiting for a rattly, decrepit, dirty and slow train

Thats what the UK seems to me after living in China for nigh on three years - rattly, decrepit, dirty and slow.

I like living in the 21st Century and living in China offers that life.  What we might see as futuristic, the Chinese see as normal. Ok. I am talking about the urban Chinese and not the rural Chinese but they take for granted that they can get on a train which is on time and will take them to their destination at 305kph. It will be well maintained, clean. uniformed hostesses walk backwards and forwards selling meals and drinks and its fast!

The local metro is also fast, air-conditioned and clean. I can get to where I want to go in Nanjing quickly and easily and they are opening up new Metro routes on a regular basis. The investment into the Chinese infrastructure is huge. Here, in Plymouth, last night the driver on the last bus from town drove straight past without stopping. It's this sort of attitude I do not miss. In China the bus stops at every stop regardless of whether anyone is waiting or not. This is because they recognise that the bus is an important social provision. Actually I would say that the Chinese local bus service is the life blood of the city and probably moves hundreds of thousands of people per day at minimal cost, about 20p standard price regardless of how long you stay on the bus. Compare that to the £2.40 (return) I have to pay to go downtown in Plymouth, a journey of about 10 minutes.

God know what I would be up to if I lived here in the UK. I have a feeling that I would probably lose my house because of the lack of employment possibilities and I would probably lose my mind due to the stupefying access to media, notably the TV. I do not miss TV.  If I want to watch TV entertainment I have access, in China, to various downloading opportunities to access what I want to watch and not what is force fed through the available channels here in the UK. I have choices.  People have the notion that China is a repressive society, it might well be for political dissidents and criminals, but to be honest I feel freer in China than ever I do in the UK.

Despite China being a 'Communist' country I do not feel like I am being spied on by a hundred CCTV cameras as I go about my daily business. The police presence on the streets in China is negligible. The most police I see are traffic police although most accommodation blocks and shops/malls do have uniformed security guards.

Here in China I can get most of the things I want without much fuss or hardship. To be honest the things I can 't get I don't miss. As a matter of fact its hardly worth racking my brain trying to come up with a list of things I miss in China as it would be as mediocre as it is mundane. To put it bluntly living in China is a less stressful environment that being at home.

I have two or three large, modern, 21st century, shopping malls within a 10k radius of my school campus, where I live. Here I can find a French supermarket - Auchan, a Starbucks, various clothes shops, a chemist (not a pharmacy) plenty of food outlets and a range of shops from Rolex and Chanel outlets to a sort of Japanese £1 shop where loads of really good stuff is priced from 10rmb (£1) and upwards. My local Chinese supermarket and fruit and veg market is just down the street. I want for nothing.

To put this in perspective I have just done a 'How stressed are you' test on Facebook. Now this is not going to be the pinnacle of social science or provide some deep psychological analysis is it? But they run you through a range of questions that takes about 6 minutes and my stress level came out at 18% a figure I pretty much agree with. 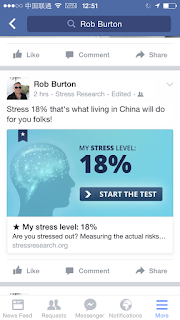 When I was in work in the UK I was plagued with migraine and acid reflux. All according to the doctors stress induced. I regularly saw counsellors for talking therapy. The best advice I got was from a Doctor in the small rural town I lived in in North Devon. I went to him seeking drugs as I was unhappy at work and was feeling pretty down. He told me that he would not give me any drugs but that I had two choices - either sort out what was happening at work that was making me unhappy or to leave the job. Good advice. It took me quite a number of years to work that one out and leave.

Part 2.
Now Im back in China. I have been back just one week. Im over the jet lag and looking forward to what will be just about my fourth year in China teaching at the same school I have been at for two years.

Like many of my colleagues, here in China, I have not been plagued by what I might call the Western industrial diseases I noted above. Stress being the most notable. Life is good.  Interestingly, and despite the issues of bad air and pollution, some of my colleagues, and myself included, have also lost most of the symptoms of the asthma we suffered from. My own problem was, I admit, fairly mild, but I don't need to carry a ventolin inhaler around with me and if I get a cold, when the symptoms really did come on, now I only get a mild attack. 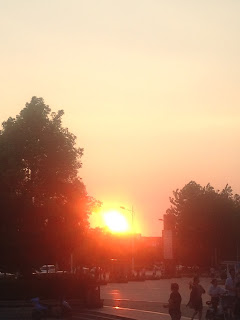 The reasons why life is so good here is that there is an excellent work/life balance. At the moment I do not know what next semester will bring in terms of work commitment, but for the last two years I have worked on average, teaching in the classroom, for about 9 hours a week, thats around 12 or 13 45 minute classes a week. I also have to do two hours a day in the office. During that time I can do any school work prep I need to do or marking. Or I can read or watch a movie or go to sleep if I want to - there is no policing of that time. I just have to be there.  So an average working week of around 19 hours for a salary that allows me to live life well and save more money than I ever have in my life.

My bills are minimum, my living accommodation is free and all I pay for is my electric. I get free wi fi, health insurance and a flight home every year. I don't get hassled by bills, bureaucracy or bullshit.  I admit I have to plough through a pile of bullshit when I do get home in the form of junk mail and idiocy from the likes of the tax office and so on but that is all compressed into one week. The rest of the year its forgotten. Its not some drip drip Japanese water torture raising stress levels every time the postman makes a call.

Im currently half way through my two month holiday. The first half as noted above being spent in Old Blighty. Here in China its Hot, Red Hot. the average temperatures over the l;last week I've been here has been up around the 35/36 degrees C mark.  Humidity has been high too. So thank god for the AC in my apartment. But hey, for most people in the UK if they want this sort of heat and sunshine they have to pay to go to Spain or Turkey for two weeks, I get it for free, every day. I have to say though Nanjing is missing having a beach and no one in their right mind would want to swim in the Yangtze River which is just down the road. Nevertheless, we have been swimming in a lovely pool at a local hotel, where the water is as warm as bath water, but refreshing just the same. 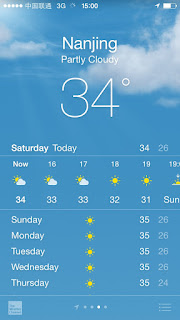 The air is as warm and as thick as treacle as I ride my electric bike through it. It pulls at your skin rather than flowing around it. Its so hot that my eyeballs prickle in their sockets as the air flows around my fake ray bans. The roads are dusty and the hot breeze pushes grit behind my shades so tears mix with the sweat as it rolls down my face.

But OH! the pleasure of wading into the cold air of my AC chilled apartment. Its like diving into the North Sea on a particularly hot day in Blackpool. I swim to the fridge in its icy depths to grab a cold beer then flop on the sofa exhausted by the heat of the day.  My dog Snooky Doggy Dog rolls her eyes at me as she lies panting after abandoning her exercise and taking off back home on her own volition. Ball in mouth - she heads home to the cool of the apartment. Whilst mad dogs and English men go out in the midday sun, I may be that English man but she's a Jack Russell and they are brighter than any mad dog out in the sun of a Nanjing summer - Nanjing one of the four furnaces of China! 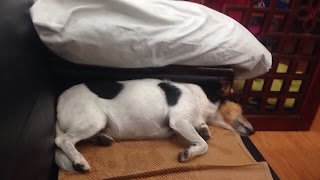 Snooky after a hard hot day