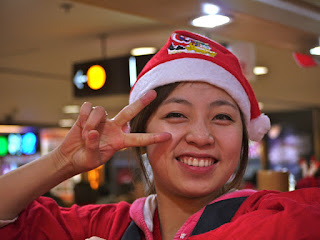 Christmas in China is a strange affair.  The trappings of the festival are all around festooning the shops, offices and public spaces. It’s the usual tat, glitter, greenery, ribbons, images of Santa, reindeer, Santa hats and snowy vistas.  But who is it for?  Surely not for the average Chinese man and woman on the street? They have a veritable smorgasbord of festivals of their own to choose from and indeed their own, immensely popular and huge Spring Festival is arriving very soon where they welcome their own New Year in. 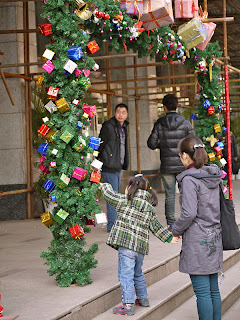 The Chinese Spring Festival which incorporates their New Year takes place over 15 days and most Chinese will take a month off work so why they are in thrall of the Christian festival Christmas takes some thinking about.  Chinese New Year is the longest and most important festivity in the Chinese calendar. The origin of Chinese New Year is itself centuries old and gains significance because of several myths and traditions. Whereas, what we know as Christmas is barely 1600 years old.
The celebration of the Chinese Spring Festival has a history of more than 4,000 years, one which originates from the Emperor Yao.  According to the history of the festival, one day around 2000 B.C., Yao took the throne and led members of his court to worship the heaven and the earth. Since then, people began to take that day as beginning of the year and marked it the first day of the first lunar month. This, of course, is the simplistic version as many other myths and traditions come together to make the whole festival.
The modern Western Christmas also shares a quite convoluted history which is tied up in paganism and burgeoning Christianity. It wasn’t until about the 4th Century that Pagan and Christian leaders agreed that the old festival of Saturnalia, held in December with its ‪concluding day being December 25th, could also be used as the celebration of the birth of Jesus Christ.  Thus, Christ’s birthday was arbitrarily set as December 25th. Apparently the earliest Christmas holidays were celebrated by drinking, sexual indulgence, singing naked in the streets (a precursor of modern caroling), etc. – which sounds to me a darn sight better than the spend fest we all indulge in nowadays.
Red also seems to be an important colour for both festivals. Red symbolises the blood of Jesus and at Christmas time, we see red everywhere.  Santa, thanks in part to the Coca Cola company’s 1930’s advertising campaigns, sports a bright blood red costume. Red is also a very popular colour for Christmas decorations, especially when teamed with green, for example the green foliage and the red berries of the holly bush which has both pagan and Christian associations.

Coke 1931
Red is the dominant colour of the Chinese spring festival too. Red, corresponding with fire, symbolizes good fortune and joy for the Chinese. Red is found everywhere during Chinese New Year and other holidays and family gatherings.  Red clothes are bought and worn. A red envelope with money inside is given to children and friends.  The red envelope is looked forward to as intensely as a child in the West’s waits for his or her presents on Christmas Day. Red is also worn at weddings as it is the traditional symbolic colour of happiness. So each society has its traditions which are linked to a particular event and/or history.  So why the crossover, so why is Christmas starting to make more of an appearance in Chinese society?  A website purporting to represent Jackie Chan (http://www.jackiechankids.com/files/Christmas_in_China.htm) tells us that if you walked around a major Chinese City 20 years ago you wouldn’t have seen many signs of Christmas.  That this has now changed has I would argue more to do with the Gods of Mammon than the birth of the Christian God child.
Christianity actually has a long history in China but it’s a history of waxing and waning of popularity since around the 7th century. Most recently, of course, after the Revolution, religion was discouraged by the State and was to all intents and purposes banned.  However, the modern Communist party places no such restrictions and a recent report tells us that as of December 2011 (The Pew Forum on Religion & Public Life) it is estimated that there are over 67 million Christians in China which is about 5 per cent of the population.
So despite the fact that many many Chinese workers in the factories of the interior spend their lives making the plastic rubbish related to Christmas time in the West they probably have very little or no idea about what the tinsel, baubles, nativity scenes and plastic Christmas trees, made by the millions, actually represent.

Workers at a Chinese Christmas Tree Factory
A Christmas in China can only mean one thing and that is as a marketing opportunity for the canny Chinese businessman, not only to sell to the expats, desperate for their Christmas fix, but to the burgeoning middle class Chinese that has money to burn.  That Christmas first started to take off in the big cities such as Beijing, Shanghai and Guangzhou is no accident, these cities have large numbers of expats and financially secure Chinese. 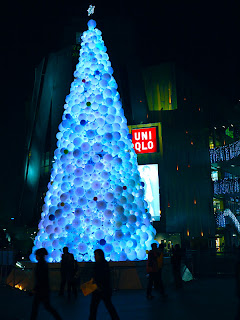 Nanjing Christmas Tree at a Mall with clothing store in back ground
A Chinese Christmas is celebrated as a happy occasion for get-togethers of friends and couples, without any religious attachment. It is a good time to celebrate with presents, good food and entertainment. Christians in China celebrate by lighting their houses with beautiful paper lanterns and decorating their Christmas trees, which they call "Trees of Light". They decorate the trees with paper chains, paper flowers, and paper lanterns. (http://www.chinahighlights.com/festivals/christmas.htm).
All of this, of course, costs money. Recently the China Finance Daily reported that the hourly minimum wage would be increased from 9 yuan to 11 yuan per hour from April 1, 2011. That’s a rise from approximately 90p per hour to £1.10p per hour. The average monthly wage was 3,896 yuan or approximately £389 for factory workers.  These wage prices are for Shanghai where wages are higher than in the rural areas of China.  Whereas, middle class salaries, for those with university/college degrees start at about 10,000 yuan a month or approximately. £1,000 rising to highs of 50,000 – 100,000 yuan per month (source http://www.gemini.com.hk/assets/doc/survey_china.pdf). So it is clear to see which social groups in China would be more drawn to Christmas given its ostentatious displays of wealth, gift giving and opulent feasting.
A Christmas without any religious attachment has to be the worst possible of all scenarios.  Whilst a Western Christmas is rapidly moving towards that there is still a semblance of religious meaning attached to the holiday. For Christians in the West it still is their major festival of course, celebrating the birth of Christ. For many others including non-practicing Christians the focus is upon the joys of spending, presents, eating, consuming and being with ones family and friends.
But behind all of that there are still the subliminal Christian messages such as 'Goodwill to All', 'Peace on Earth’, the rejection of scroogism and a focus on charity whether through giving of money or the giving of time at homeless shelters – the success of Charitable appeals at this time of year support that.   It is a time when we try to reconcile ourselves with family and friends, to bury the hatchet, to bring harmony and joy to the world and our lives, however spurious and short lived those attempts might be. Although, it must be said, most of the time is spent, drinking, gorging and watching crap TV – a spooky reflection or indeed a return to, the more basic instincts and bacchanalian pleasures of the earlier pagan times.
Indeed, perhaps that’s all we want to do at Christmas – Eat, Drink and Be Merry – wherever and whoever we are in the world!
Ho Ho Ho.
Posted by Rob Burton at 19:09